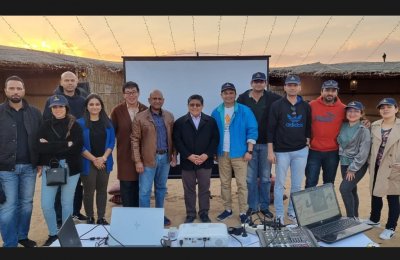 Singapore is now very much open and continues to welcome visitors from the Middle East, said a senior official of Singapore Tourism Board (STB).
Singapore remains a family destination with so many experiences and it is a safe city, said G B Srithar, Regional Director, SE Asia Middle East & Africa, STB.
He was speaking to media during a Media Lunch hosted by STB and Singapore Airlines in Dubai.
Srithar, who is based in STB’s Mumbai office which is responsible for the GCC/Middle East region, said Singapore Tourism Board remains engaged in this market.
Aswin K, General Manager Gulf & Middle East - Singapore Airlines, added that the airline is ramping up flight connections and is now at 75% of pre-covid capacity.
“China was a major chunk of our network. So, bearing this in mind, we are more or less back to normal and over the next few months, the numbers will spike upwards,” he said.
Singapore Airlines has invested a lot over the last few years and during Covid to ensure that the Singapore experience shines on board, including the food.  Over these next few months, a lot of new developments will announced, he said.
Srithar shared the recently announced tourism numbers for Singapore.
Singapore’s international visitor arrivals (IVA) reached 6.3 million in 2022, about 33% of 2019 IVA.  This exceeded the forecast of 4 million to 6 million, he said.  Tourism receipts are estimated to have reached S$13.8 billion to S$14.3 billion, which is approximately 50-52% of 2019.
Looking at the GCC market, Singapore welcomed 79,630 visitors in 2022, approximately 60% of 2019  IVA from the region. The UAE accounted for 42,970 of this, which is 39% of 2019 IVA.  The peak months were July and August 2022.  The average length of stay from the region was 5.3 days.
“The UAE is clearly our number one source marketing within the GCC,” he said.
The different experiences that existed before such as the zoo, the wildlife parks, Sentosa &  Marina  Bay Sands, etc., are ramping up their experiences, and in addition, visitors are now wanting to experience the local delights, he said.
Singapore is also liked by young travellers since the city is perceived as a great lifestyle, events, and F & B destination.
Cruise is another segment that is growing and Singapore is looking at maintaining and growing the destination as a cruise hub. The Middle East will be a key source for this segment, said Srithar.
Renjie Wong, Area Director India. Middle East & South Asia, added: “As someone being born and raised in Singapore, for me personally, what most exciting about Singapore is that the city is constantly changing.”  -TradeArabia News Service