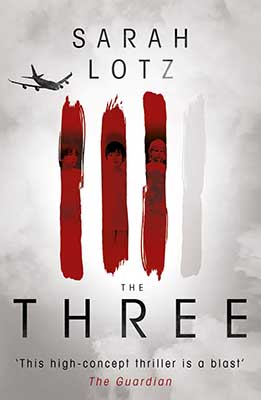 South African writer Sarah Lotz’s thriller The Three is likely to prevent any nervous flyer from boarding a plane with the opening pages.

If you are planning a holiday abroad anytime soon, I would advise against choosing this book as your reading material if you are a passenger with a nervous disposition.

That said, I really enjoyed this book as it was full of suspense and mystery.

The first character we meet is Pam, who has an untimely death within the first few pages in a plane crash, which Lotz described in considerable detail.

Following the crash, Pam made a voice recording which the reader is presented with prior to the start of the book – an element that along with the opening pages was a great way to lead into the main narrative.

Pam’s flight is not the only plane to have gone down on that day, four planes crashed within hours of each other, killing more than 1,000 people and leaving just three improbable young survivors.

It is these child survivors that form the name of the book, as they become known as The Three and are the subject of considerable Press speculation, particularly when details emerge about how odd their behaviour is.

Written in the form of a non-fiction book, The Three is a mix of interviews, an unfinished biography and online messages that combined piece together the disturbing details of what happened on what Lotz called ‘Black Thursday’.

The author has previously written this genre of book as one half of S L Grey and has proved that she is skilled at writing about paranoia, dread and piling on the suspense.

As with her other book Under Ground, I again feel that there were a lot of characters in The Three, meaning you really have to pay attention and keep track of who is who.

Irrespective of the minor character overload I enjoyed this book and think the prevailing hook to The Three is the need for explanation when tragedy hits.

Varying points of view are successfully assumed by the various narrators that bring their own perspective to the story.

Pick up a copy of The Three by Sarah Lotz at The Bookcase in Budaiya for BD6.