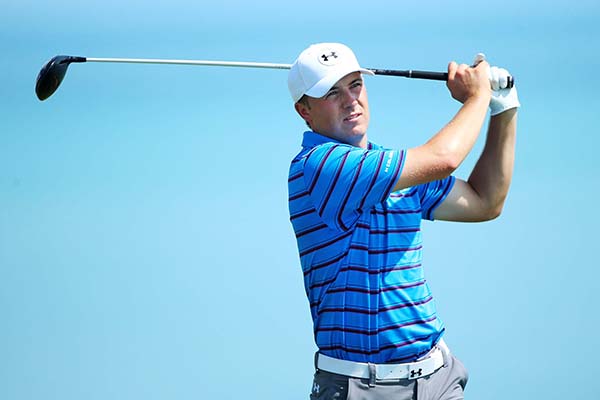 Kohler: Jordan Spieth stepped up his bid for golf history at the PGA Championship yesterday, firing a second-round 67 that moved him within one stroke of David Lingmerth’s clubhouse lead.

Lingmerth had eight birdies, four bogeys and a double-bogey in a roller-coaster of a two-under par 70.

The Swede got as low as eight-under, and his 36-hole total of seven-under 137 gave him the outright lead when he walked off the course.

Lingmerth didn’t expect that to stand up, and Dustin Johnson, the overnight leader on six-under, had indeed moved to eight under through 10 holes.

Australian Matt Jones was 10-under through nine holes under increasingly threatening skies.

“I saw nine-under, I wish I could have done that,” Lingmerth said. “But too many bad shots.”

Spieth, who started the day five off Johnson’s lead, had six birdies and one bogey in his 67 for six-under 138.

After victories in the Masters and US Open, the 22-year-old Texan has a chance to join Ben Hogan and Tiger Woods as the only men to win three major championships in the same year.

After teeing off on 10, Spieth birdied 11 and bogeyed 12. A birdie at 16 was followed by an improbable birdie at 18, where he holed out from a bunker.

“All in all, I felt like I scored the way I played,” said Spieth, who was less than satisfied with his driver.

“My ball striking into greens is pretty good. I made a couple of putts today. With a couple of chip-ins for the week and really smart course management and good speed control, we have been able to hold ourselves in there.”

Spieth expected the afternoon to produce enough low scores to push him down the leaderboard.

But with Rory McIlroy’s world number one ranking in his sights, he separated himself from the Northern Ireland star.

McIlroy posted a second successive 71 on Friday that left him five shots off the pace in his bid for a second straight PGA Championship crown.

His round was marred by a damaging double bogey at the par-four 18th, where a beautiful drive was followed by a second shot into the rough.

He got back on track with his own unlikely break – an eagle at the par-five second hole where he chipped in from the front of the green.

But McIlroy played the remaining holes in even par, unable to keep pace as Spieth picked up three birdies on his inward run.

“I didn’t putt as well as I would have liked,” McIlroy said. “So, yeah, maybe just work on that a little bit before I tee off tomorrow and it would be great to hole a few more putts, because I feel like I’m giving myself plenty of chances.”

British Open champion Zach Johnson, the third player in the “super-group” along with Spieth and McIlroy, endured another frustrating day that had him headed for an early exit.

He opened with three straight birdies, but finished with four birdies and four bogeys in a 72 that left him three-over for the tournament.

Japan’s Hiroshi Iwata matched a major championship record with a nine-under par 63 – the 27th time a player has shot 63 in a major. Two players – Greg Norman and Vijay Singh – did it twice.

Iwata had eight birdies and an eagle with one bogey to build a four-under total of 140 for 36 holes.

South African George Coetzee powered up the leaderboard with an eight-under par 65.

Coetzee, a two-time winner on the European Tour this year, had seven birdies and an eagle at the par-five 16th, where he stuck his second shot six feet from the pin and made the putt.

A birdie at 17 moved him to six-under for the tournament, but he was in a fairway bunker en route to a closing bogey.

“You could see there was much more birdies to be had out there,” Coetzee said. “The guys are definitely not hanging back like they did yesterday.”

The 14-time major champion was one-over through nine holes and looking set to miss the cut at a third stright major.