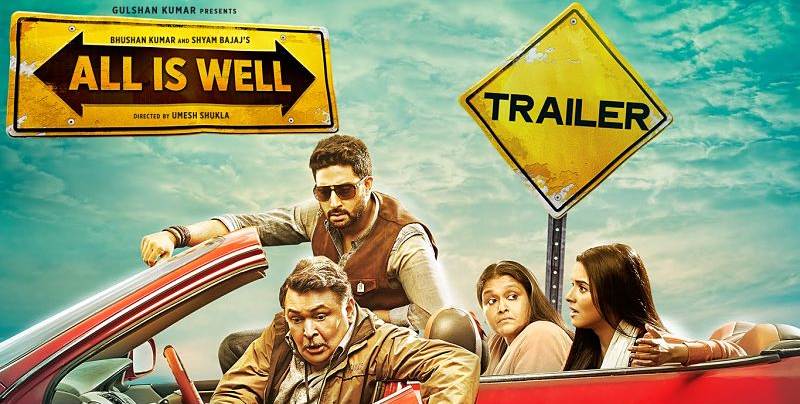 The film's tagline says it all: All is Well is "all about caring for your family". Not a bad starting point that, but the film makes rather heavy weather of its voyage to its thematic destination.

Director Umesh Shukla works with two distinct moods ‘comic and emotional’. While he handles the first with a fair degree of flair, he isn't quite as self-assured with the latter, which pushes the drama into the domain of unconvincing contrivances.

So, All is Well is the kind of film that is watchable only in parts. As it nears its business end, the facile climax, it takes on unintentionally laughable overtones.

This is the story of Inder Bhalla (Abhishek Bachchan), who hates his father Bhajanlal Bhalla (Rishi Kapoor) because the latter wants to foist his bakery on the young man, unmindful of his personal ambitions.

The son is a singer who now lives in Bangkok because he wants to get away from the constraints of small-town India.

He is forced to return home in response to a phone call from a man called Cheema (Zeeshan Mohammad Ayyub), who has over the years lent the protagonist's baker-father lakhs of rupees.

The unflappable old man is unrepentant and refuses to part with his bakery to pay off his debt.

His obduracy sparks off a comic battle of attrition between the Bhallas on the hand and Cheema and his men on the other, which plays out in the form of a chase in which the hunted and the hunter go around in circles.

Inder has two other stories unfolding in his complex life. One hinges on a mother (Supriya Pathak) suffering from Alzheimer's.

The other revolves around his neglected girlfriend, Nimmi (Asin), who is on the way to get married to another man.

This story of a man in the grip of by a negative mindset that compels him to keep both his parents and his girlfriend at bay is enjoyable only until it plays up the comic aspects of the rigmarole.

When the tale turns deadly serious in the second half, it assumes overly moralistic proportions and loses its entertaining edge in the bargain.

The film's many failings are somewhat offset by the quality of the performances, with Abhishek Bachchan pulling off the pivotal role with some effort to spare.

The character, of course, suits him to a T because its arc is restricted to a set pattern into which the actor settles with ease.

Rishi Kapoor is formidable as the father, conveying a wide range of emotions. The versatile Zeeshan Mohammad Ayyub, on his part, anchors the funny passages with commendable aplomb.

All is Well is a well-meaning, mildly diverting trip that tends to meander far too much for its own good, but, despite the avoidable detours, it does manage to get somewhere in the end.