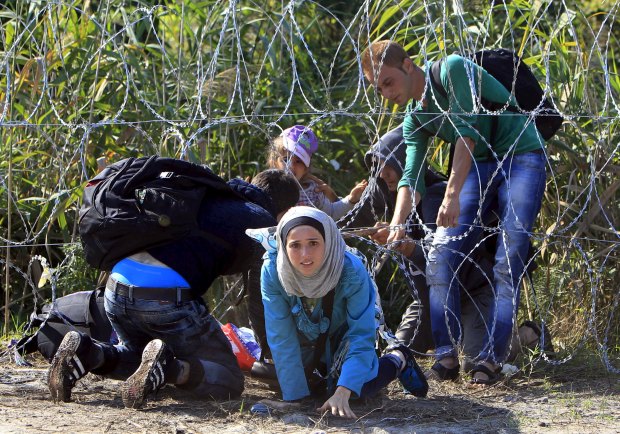 A Syrian migrant family enters Hungary at the border with Serbia near Roszke. (Reuters Photo)

BEIRUT: Syria's four-and-a-half year conflict has driven half of the country's people to flee their homes, with the number of those who have left the country approaching 20 per cent of the pre-war population.

At least 7.6 million people are displaced within Syria, which counted 23m inhabitants at the start of the civil war.

More than 4m have become refugees.

According to the head of UN humanitarian operations, aid in Syria continues to be blocked by belligerents, particularly in difficult-to-access zones or those occupied by regime or opposition forces.

"This is the biggest refugee population from a single conflict in a generation," UN refugee chief Antonio Guterres said in July.

"It is a population that needs the support of the world but is instead living in dire conditions and sinking deeper into poverty," he said.

In July, the United Nations High Commissioner for Refugees (UNHCR) said the number of refugees had surged by one million in 10 months, forecasting that the total will reach 4.27m by year end.

Most of the refugees have gone to neighbouring countries but, with a lack of jobs and inadequate humanitarian assistance, thousands are now seeking to emigrate to Europe.

Turkey, at 1.8m, and Lebanon, at 1.1m, have so far taken in the largest number of refugees.

The UNHCR says another 600,000 are in Jordan, but the government there puts the number at 1.4m, a figure equal to 20pc of the kingdom's population.

Refugees face poverty, health problems and tensions with local inhabitants where they live in temporary housing and extremely difficult conditions.

In late June, the United Nations and partner humanitarian agencies pointed to an acute shortage of money to provide aid to the refugees and their hosts. They appealed for funding to be speeded up, speaking of a "massive crisis."

The Syrian rebellion erupted in March 2011 after the repression of peaceful pro-reform protests prompted an armed uprising against President Bashar al-Assad.

More than 240,000 have so far been killed in the conflict, according to the Syrian Observatory for Human Rights.