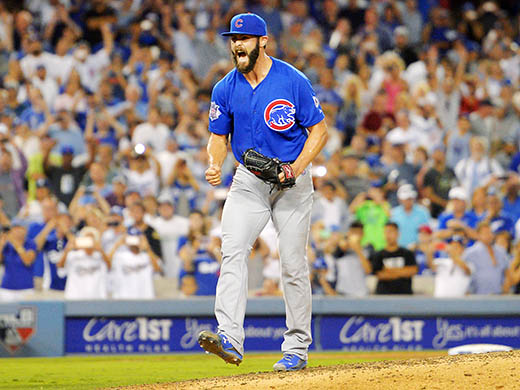 Los Angeles: Chicago Cubs pitcher Jake Arrieta threw a no-hitter on Sunday in a 2-0 victory over the Los Angeles Dodgers at Dodger Stadium, the sixth no-hitter in Major League Baseball this season.

Arrieta’s pitching masterclass – the first Cubs no-hitter in seven years – made the 29-year-old the major leagues leader in victories.

The 6ft 4in right hander allowed only two baserunners, a walk and an error, on his way to collecting 12 strikeouts from 116 pitches.

It was the first Cubs no-hitter since Carlos Zambrano achieved the feat in 2008 against the Houston Astros.

“I was just making pitches, and if it happened, it happened,” Arrieta told ESPN after the final out. “I was able to finish it off. It’s a great feeling.”

It was the second time in 10 days that the Dodgers have been on the wrong end of a no-hitter after Astros star Mike Fiers achieved the feat on August 21 in Houston.

“I think it’ll be even more special the longer it sets in, but it’s a good feeling,” Arrieta said.

“I’ve come a long way. I just look forward to keep getting better, building, being a good teammate and hopefully getting to the postseason with this group of guys.”

In Atlanta, Jacoby Ellsbury hit a three-run homer, and Chase Headley and Stephen Drew each added a two-run shot as the New York Yankees routed the Braves 20-6 to finish a three-game sweep.

All three homers, which helped build an 8-2 lead, came with two outs. Headley and Drew, who had four hits, both drove in four runs.

After the Braves cut the lead to 8-5, pinch-hitter Alex Rodriguez drove in two runs with a bases-loaded single in the Yankees’ nine-run seventh inning.

The U.S. flag at Turner Field flew at half-staff and a moment of silence was observed before the game in memory of Gregory K. Murrey.

Michael Cuddyer hit a tiebreaking single in the seventh inning as the NL East-leading New York Mets stopped their five-game home losing streak with a 5-4 win over the Boston Red Sox, while Washington’s Jayson Werth homered and drove in three runs, and Clint Robinson added a pinch-hit homer as the Nationals had 13 hits to rally past the Miami Marlins 7-4.

In other games, Derek Holland struck out every Baltimore batter while throwing a three-hitter for his eighth career shutout, leading the Texas Rangers to a 6-0 win and a three-game sweep of the Baltimore Orioles, the Colorado Rockies blanked the Pittsburgh Pirates 5-0, the Tampa Bay Rays edged the Kansas City Royals 3-2 and the Minnesota Twins defeated the Houston Astros 7-5.

Cleveland’s Abraham Almonte hit his first career grand slam as the Indians trounced the Los Angeles Angels 9-2, the Chicago White Sox overcame the Seattle Mariners over 11 innings, the Milwaukee Brewers downed the Cincinnati Reds 4-1, the Oakland Athletics held out the Arizona Diamondbacks for a 7-4 11th innings win and the San Diego Padres were 9-4 winners over the Philadelphia Phillies.