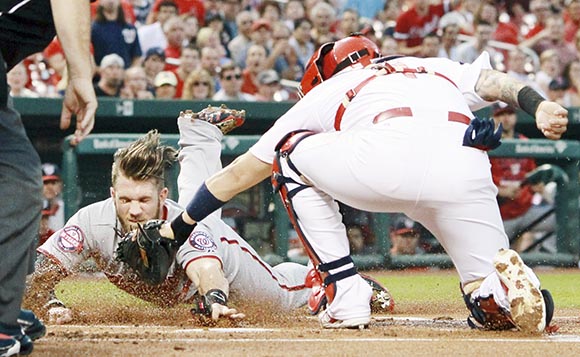 ST LOUIS: Washington’s Ryan Zimmerman homered twice and doubled home the tiebreaking run in the eighth inning to lift the Nationals to a 4-3 win at St Louis on Wednesday, ending an alarming nine-game losing sequence in Major League Baseball.

The Nationals had loomed as one of the main competitors to the Cardinals for the National League title until the sudden slide, which left them 6-1/2 games off the pace in the NL East division and eight games off the wild card berth, with only 30 games left to play.

St Louis maintained its six-game lead in the NL Central as nearest rival Pittsburgh lost to Milwaukee, while the Los Angeles Dodgers completed a series sweep of NL West rival San Francisco to build a 6-1/2 game lead in that division.

In the American League, Kansas City routed Detroit while Toronto beat Cleveland to maintain its lead in the AL East.

Nationals starter Max Scherzer struck out 11 and left with a 3-2 lead after the sixth. Johnathon Papelbon earned his 23rd save in as many chances, escaping a jam in which there were runners at the corner bases with one out.

Los Angeles’ Clayton Kershaw struck out 15 to set a career high 251 for the season as the Dodgers beat San Francisco 2-1.

Kershaw (12-6) beat the Giants for the first time in four starts this season. He allowed one run and one walk in a career high-tying 132 pitches for his third complete game of the season. The 15 strikeouts also equaled a career high.

Chase Utley hit a go-ahead homer in the sixth inning for the Dodgers.

Ventura (10-7) walked one and hit one while matching a career high for strikeouts set in his last start. The 24-year-old with the 100 mph fastball has not allowed more than two earned runs in his past five outings, and has won his past six decisions.

Toronto’s RA Dickey pitched a complete game to win his seventh straight decision and lead the Blue Jays past Cleveland 5-1.

Dickey (10-10) threw 92 pitches, including 68 strikes, in his second complete game of the season and 15th of his career. He’s unbeaten in 10 starts. The knuckleballer set down 14 straight before giving up a single in the ninth.

Josh Donaldson had three hits with three RBIs - raising his majors-leading total to 111 -  as the Blue Jays won for the fifth time in six games and maintained a 1 1/2-game lead over the New York Yankees in the AL East.

Milwaukee’s Jonathan Lucroy drove in three runs and extended his hitting streak to a career high-tying 10 games as the Brewers beat Pittsburgh 9-4.

Adam Lind homered, singled and drove in two runs for Milwaukee, which has won seven of its past eight against the Pirates.

Seattle rookie Shawn O’Malley had three hits, including a tiebreaking RBI single in a two-run eighth inning as the Mariners beat Houston 8-3.

O’Malley’s line drive scored Logan Morrison to put Seattle on top 4-3 in the eighth, and Morrison padded Seattle’s lead with a three-run shot in the ninth.

It was the season debut for O’Malley, who had played 11 games with the Angels last year but spent all this year in the minor leagues before being called up on Tuesday.

The win was the 800th of Yankees manager Joe Girardi’s career. He guided the Marlins for one year and is in eighth season with New York. The Yankees have a 7-2 record at Fenway Park this season.