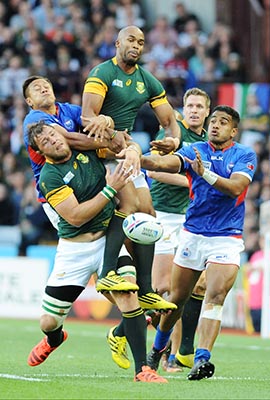 Birmingham: JP Pietersen’s hat-trick of tries helped under-pressure South Africa rebound from their shock defeat by Japan to notch up a resounding bonus-point 46-6 victory over Samoa yesterday to get their World Cup campaign well and truly back on track.

Rarely can a team have gone into a match under as much pressure as the two-time champions, whose sports minister Fikile Mbalula underlined in a pre-match tweet that a “WIN is non-negotiable”.

The Springboks’ 34-32 defeat by the Japanese in their opening Pool B game was the biggest upset in modern-day rugby, leading to some serious introspection from under-fire coach Heyneke Meyer, his players and a country where union is the national sport.

But Pietersen’s hat-trick, two pushovers from outstanding flanker Schalk Burger and replacement hooker Schalk Brits, and a late Bryan Habana effort, allied with 16 points from the boot of Handre Pollard and Pat Lambie, formed the bedrock for the win at Villa Park, home to English Premier League team Aston Villa and last host to a rugby union match in 1953.

South Africa now go on to play Scotland at Newcastle’s St James Park on October 3, with a four-day turnaround before facing the United States at the Olympic Stadium.

Samoa, who opened their campaign with a 25-16 win over the US, face Japan in Milton Keynes on October 3 and Scotland a week later in Newcastle.

The Springboks could not have got off to a better start, Pieteresen chasing up the kick-off and Joe Tekori penalised as Samoa scrabbled for the ball, Pollard hitting the opening three points. Pollard was caught offside as Samoa roared back up the pitch, Mike Stanley’s penalty going over off the post to draw the scores level.

Stanley kicked his second shortly afterwards when Pollard’s restart went direct into touch and the ‘Bok frontrow wilted under a Samoa push at the resulting scrum.

With Tim Nanai-Williams and Stanley at the forefront of a slick-looking Samoan attack, the fly-half’s telegraphed pass was picked off by Pietersen who hared in for a try.

Pollard spooned his conversion wide but kicked a second penalty moments later as Samoa’s ill-discipline began to show through when the Springboks attacked through the driving maul and Burger up the middle.

The 21-year-old South African fly-half nailed his third penalty in the 24th minute to take his side out to 14-6.