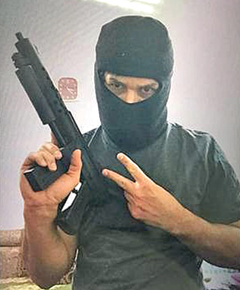 Kuwait City: A Kuwaiti man accused of cheating and forgery found himself in more trouble with the police when photos of him posing with a gun were discovered.

According to a report in Kuwait News, the man was arrested in Rai, in connection with a cheating and forgery case. It was during investigation that police discovered pictures on the man's mobile phone of him posing with a gun.

The police are now trying to ascertain how the man, believed to be in his 40s, procured the weapon.

The accused however claims that the gun was fake.