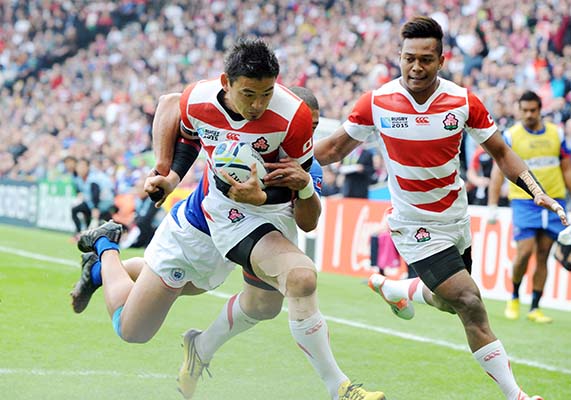 Milton Keynes: Japan rekindled the belief and the fire that helped them stun South Africa to crush rudderless and ragged Samoa 26-5 yesterday and stay in contention for the Rugby World Cup quarter-finals.

A dominant performance from Eddie Jones’ side left the Brave Blossoms with hope of reaching the last eight for the first time as they head into their final Pool B match against the United States next Sunday.

Refreshed from a 10-day break after defeat by Scotland, Japan showed that their opening victory over the Springboks was no flash in the pan, with their forwards more than a match for the big but disorganised Samoans.

Jones said he had got his team selection wrong when they lined up to face the Scots four days after causing the biggest upset in World Cup history and he named the most experienced Japan side ever for their third pool match.

The changes paid off. With quick recycled ball and smooth handling in the backline another feature of their play, Japan deservedly led 20-0 at halftime. The majority of points stemmed from Samoan indiscipline, which was routinely punished by referee Craig Joubert and the boot of fullback Ayumu Goromaru.

Joubert’s patience with the Pacific Islanders was already wearing thin, having ordered forwards Faifili Levave and Sakaria Taulafo to the sin bin in quick succession, when he awarded Japan a penalty try after 23 minutes for yet another indiscretion in the scrum.

Samoa, who felt the full force of a Springboks backlash in a 46-6 defeat last week, barely got out of their own half in the opening 40 minutes. They had little time with the ball and, one burst from Tim Nanai-Williams apart, offered no real attacking threat.

The pressure from Japan told again just before halftime, when right wing Akihito Yamada spun and launched himself over the line in the corner, with Goromaru kicking a difficult conversion.

Samoa had to go for broke after the break but there was little change in momentum.

Japan were all over their frustrated opponents in the set piece, used the ball more intelligently and Goromaru, the leading scorer in this tournament, stepped up when asked to slot over the penalties to put the game out of sight.

The loss of concussed try scorer Yamada was a blow to the red and whites but they never let up and Samoa’s only try, from centre Paul Perez, was little consolation for Stephen Betham’s well-beaten side.