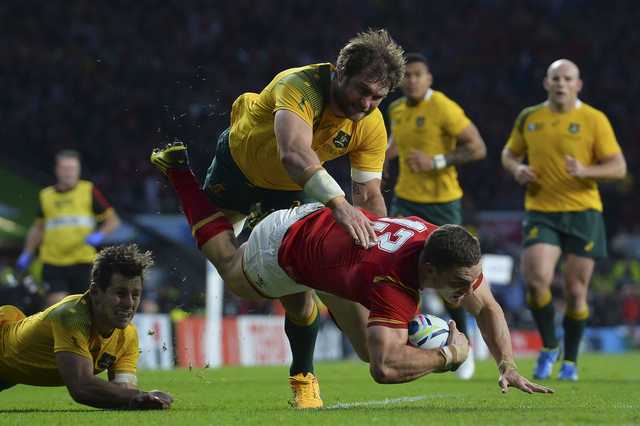 London: Australia emerged from an epic World Cup battle bruised, battered but proud having resisted a Welsh onslaught despite being two men down for a crucial spell of the second-half.

"It was highly stressful, I won't lie," said one of the standouts of their epic defence Adam Ashley-Cooper, as he and the other Wallabies began two days of much-needed rest before preparing to face Scotland in the quarter-finals next Sunday.

"We stuck to it. We held together, our backs were to the wall and we never gave up and that is a great part of this Australian team. It is something we are trying to develop -- that 'never give up' attitude."

Crucially they stopped Wales scoring a single point in the second half in one of the most courageous performances seen in the tournament.

Wales hurled everyone forward for a try when Australia lost scrum-half Will Genia and lock Dean Mumm to the sin-bin.

The ball was never far from the Australia line during the eight minute spell when Ashley-Cooper and his fellow defenders finished one tackle, pulled themselves up and hurled their bodies into the breach again.

"There's a few sore bodies, it was a brutal game but everyone has got a smile on the face and happy with the win," said the 31-year-old Ashley-Cooper who produced one of the tackles of the tournament to stop Wales' Dan Biggar crossing over in the 68th minute.

Ashley-Cooper raced out of the line to stop Biggar with the ball and Kurtley Beale managed to get it away from the Welshman.

"It was a lucky read in a way, an educated gamble, but I was lucky enough to pull it off and obviously 'Bealey' came over the top and got the steal," said Ashley-Cooper, reliving the moment.

"Test match footy is always pretty intense but that would certainly be one of the most intense, stressful times of Test match footy. Two men down and Wales continually pressing against the line. It was tough, it could have gone either way."

Australia defence coach Nathan Grey said "the whole team's performance was exceptional. The guys should be very proud of the effort."

"We have a complete trust in the players to be able to deal with those situations.

"We train for it occasionally -- not too much -- but the effort that it takes the guys in terms of making those tackles and getting up off the ground and getting back in the defensive line, it doesn't take a lot of talent it just takes a lot of determination."

Australia's defence faced some criticism on their last tour of Europe in November last year but has performed brilliantly at the World Cup in beating Wales, England 33-13 and Fiji 28-13 to top Pool A.

"The improvement has come from the team being together and playing a lot more together, having a good clear understanding of what we want to try to do on the field and then having trust in each other," said Grey.

Australia's main doubt is No8 David Pocock who limped off in the second half.

"He got a knock in his calf and came off so we are just assessing that today," said Grey, refusing to speculate on whether he is a doubt for the Scotland date.