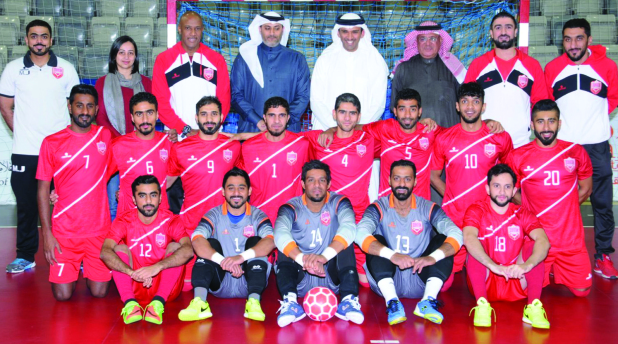 Bahrain futsal team members with officials before their departure to Chinese Taipei.

BAHRAIN kick off their campaign today at 2pm (Bahrain time) against hosts Chinese Taipei in the 2018 AFC Futsal Championship in Chinese Taipei.

The two other teams in Bahrain’s Group ‘A’ are Vietnam and Malaysia.

Bahrain take on Vietnam on Saturday and play their final group game against Malaysia on Monday.

Bahrain’s last appearance in the AFC Futsal Championship was in the 2002 edition in Indonesia.

Bahrain coach Adel Marzooq believes his team has come a long way since then but admitted that it would be tough facing Chinese Taipei in front of their home crowd.

“It’s been a long time since the national futsal team was in this tournament and this time we are hoping to reach the knockout stage,” said Marzooq.

“It’s an advantage for them (Chinese Taipei) for sure, because they know the conditions better. But we will still do our best and show the development of futsal in Bahrain through our performance in this tournament.”

The Bahrainis left for Chinese Taipei on Monday and prior to their departure Bahrain Football Association president Shaikh Ali bin Khalifa Al Khalifa met the team members and wished them all success.

The top two teams advance to the next stage