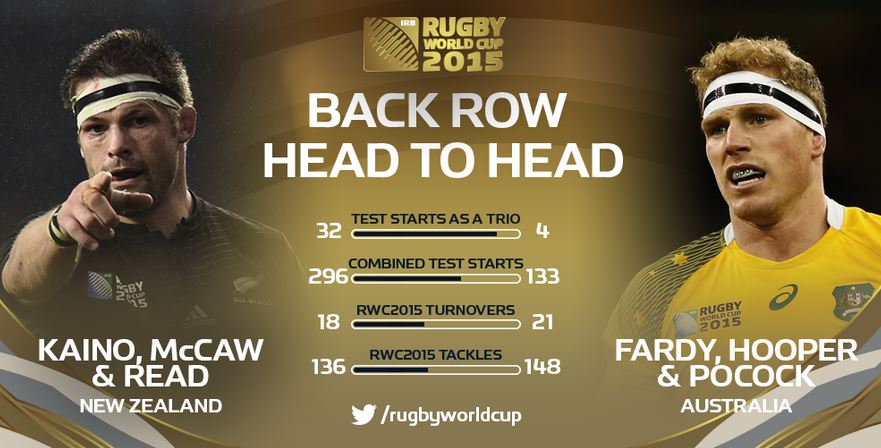 London: Hailed already by some as all-time greats, New Zealand will be venerated in rugby folklore if they become the first team to win back-to-back World Cups by beating Australia at Twickenham tonight.

The old adversaries, both twice winners, meet in the denouement of the global showpiece for the first time since the tournament's inception in 1987 having previously only met in three semi-finals.

The All Blacks swept aside the Wallabies four years ago on the way to ending their 24-year wait for a second triumph and Steve Hansen's side have unquestionably been the dominant force since.

New Zealand have suffered only three defeats in 53 games spanning the four years after their 2011 triumph and tonight's trans-Tasman battle will signify a changing of the guard for the men in black.

The likes of flyhalf supreme Dan Carter and centres Ma'a Nonu and Conrad Smith head to pastures new in French club rugby after long and distinguished international careers, with talisman and captain Richie McCaw also highly likely to call time after extending his world record to 148 caps. Lifting the Webb Ellis Cup aloft would be a fitting end not only for the 34-year-old McCaw, who Hansen thinks is the "best rugby player to have played the game", but for Carter who missed the 2011 final through injury. "He is probably the greatest player we have had play the game," Hansen said of McCaw on Thursday. "Certainly for New Zealand."

Standing in their path are a rejuvenated Australia side who have gone from a team in chaos and racked by infighting to World Cup finalists since Michael Cheika was appointed last October after Ewen McKenzie's shock resignation.

Cheika lost three of his first four games in charge but, since slumping to sixth in the world rankings in March, Australia have claimed the southern hemisphere's Rugby Championship, culminating in a 27-19 win over New Zealand in Sydney -- their first win over the All Blacks since 2011.

Impressive wins over England and Wales in the pool stage confirmed their credentials for the title and having enjoyed a quarter-final let-off against Scotland, the Wallabies were both clinical in attack and resilient in defence in defeating Argentina to reach the final.

They will need to step up a notch again with Hansen naming an unchanged All Blacks team and bench from the one that beat South Africa 20-18 last weekend. Australia have made one change with loosehead prop Scott Sio back after recovering from an elbow injury. Centre Matt Giteau, 33, is the lone survivor from the last Australian team to play in the World Cup final, in 2003 when they lost to England.