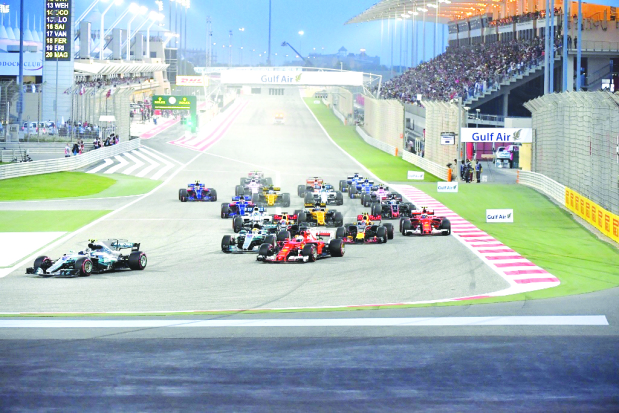 The weekend’s on-track events will be highlighted by the 57-lap night race.

This year’s Bahrain Grand Prix will flag off at 6.10pm, 10 minutes later than its regular start time. Twenty of the world’s most popular star drivers will be lining up on the grid representing 10 of motorsport’s leading international racing teams.

Amongst them will be last year’s winner at BIC, Sebastian Vettel of Ferrari, along with defending World champion Lewis Hamilton of Mercedes.

Aside from Formula 1, there will also be plenty of racing in the two support series, namely the FIA Formula 2 Championship and the Porsche GT3 Cup Challenge Middle East.

Formula 2 is widely accepted to be the chief feeder series to Formula 1. It will be holding the opening round of its 2018 season at the Bahrain Grand Prix.

The Porsche GT3 Cup is the biggest and most popular one-make motor racing championship in the entire region. It has been the number one choice of the Arab world’s most promising circuit racing drivers to broaden their racing experience in a professionally run series. The series will be holding its sixth and final round of its 2017/2018 campaign.

Tickets to this year’s Bahrain Grand Prix can be purchased at the BIC stand at Bahrain City Centre. They can also be bought online at www.bahraingp.com or by calling the BIC Hotline on +973-17-450000. The prices are amongst the most competitive for any event on the Formula 1 calendar, with prices held at the same level for the fifth consecutive year.