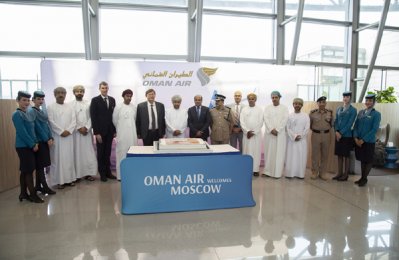 Al Raisi said: “I am pleased to announce the addition of a new long-awaited route to our network. Russia is an increasingly important destination from Oman, and since we announced this route earlier in the year, we have seen strong interest, both from Oman travellers and from customers transitting through our Muscat hub from cities around the world. Connecting Muscat with Moscow, we expect this daily service to further stimulate economic, trade and business relations between the two friendly countries."

"Trade between Oman and Russia continues to rise and we are happy to be able to facilitate this further with the start of this service. Oman is turning into a very important regional logistics hub with world-class infrastructure and we are sure this is recognised by the business enterprises in Russia. Apart from strengthening and opening up new business opportunities between Russia and Oman, our flights will also open the gates for Russian tourists to come and enjoy our beautiful country,” he said.

This new route will be serviced by Boeing 737 MAX 8 aircraft, designed to offer exceptional performance, flexibility and efficiency. Configured with 162 seats in a two-class configuration: 12 in business and 150 in economy with significant enhancements across both cabins — the MAX aircraft is an example of Oman Air’s commitment to continually upgrading its products and services to deliver guest satisfaction.

Starrs said: “Our new service will provide more choice and greater convenience as more travellers look to Russia for a holiday getaway. We have done a great deal of preparation before commencing this route through several niche events and agent meet-ups and I am confident that this new addition will be another successful destination for Oman Air. We are sure that there will be demand for both business and leisure traffic, allowing us to showcase our own beautiful country to Russian visitors. Our Russian guests will also be able to take advantage of our fantastic new passenger terminal in Muscat Airport which houses Oman Air’s bespoke premium lounges, 6,000 square metres of Duty Free shopping, 96 check-in counters and a modern 90-room airside hotel.”

The new service between Moscow and Muscat is the airline’s third route launched this year after Istanbul and Casablanca and is part of Oman Air’s exciting fleet and network expansion programme, which will see the airline operate up to 70 aircraft to around 60 destinations by 2022. - TradeArabia News Service