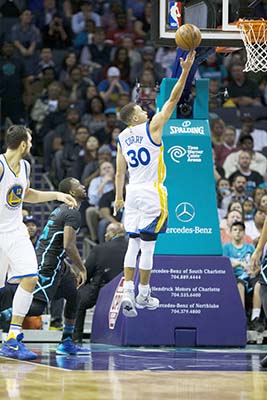 “He didn’t make any guarantees,” Curry said with a smile.

The reigning MVP scored 40 points in three quarters as the Golden State Warriors easily defeated the Hornets 116-99 to extend the best start in NBA history to 20-0.

On a night when the Hornets honoured Dell Curry, the franchise’s career scoring leader, with a “key to Buzz City,” it was his oldest son who stole the spotlight by hitting 14 of 18 shots from the field and going eight for 11 from three-point range.

Stephen Curry, who grew up in Charlotte, scored 28 points in the pivotal third quarter, including his team’s final 24. He hit 10 of 11 shots from the field, including all five 3s — many from well beyond the arc and in the face of a defender - to help the Warriors build a 21-point cushion.

He sat out the entire fourth quarter due to the big lead and didn’t get a shot to break his career high of 54.

“It was a cool atmosphere to play in, especially on top of my dad’s ceremony,” Stephen Curry said. “It was nice to be out there at halftime and hear his speech and stand with my mom, my sister, my aunts and my grandma. It was a good night. I can’t ask for more. To play like I did and get the win was special.”

He said the 20-0 start to the season seems surreal.

“It doesn’t even sound right,” he said. “In the NBA, with so many good players and good teams, to be able to put on a run like this is special. We don’t always play our best but we find ways to win. That’s the strength of our team. Every night a different guy might step up and have a huge game and do the little things that don’t show up in the stat sheet.”

The Lakers had a 108-104 win over the Wizards, with Kobe Bryant scoring 12 of his season-high 31 points in the fourth quarter of his final game in Washington.

Julius Randle had 15 points and a career-best 19 rebounds for the Lakers (3-15), who ended a seven-game losing streak. Jordan Clarkson added 18 points as Los Angeles finished a stretch of four games in five days.

Bryant played 36 minutes in his second game since announcing his plans to retire after this season, his 20th in the NBA.

He left the Verizon Center floor to thunderous applause from what remained from a crowd of 20,356, Washington’s third sellout of the season.

At Atlanta, Kyle Lowry scored 22 of his season-high 31 points in the fourth quarter as Toronto rallied from 17 down in the third to beat the Raptors 96-86. Lowry overcame flu-like symptoms that forced him from the game in the second period. He returned to begin the third, but didn’t build momentum until the fourth when Toronto outscored the Hawks 39-20.

Elsewhere, the Pacers extending their winning streak to six games with a 103-91 victory over the Clippers, the Spurs maintained their unbeaten run at home with a 95-70 win over the Bucks, the Rockets rallied from a double-digit deficit to beat the Pelicans 108-101, the Bulls beat the Pelicans 99-90, the Pistons beat the Suns 127-122 in overtime and the Knicks had a 99-87 win over the 76ers.