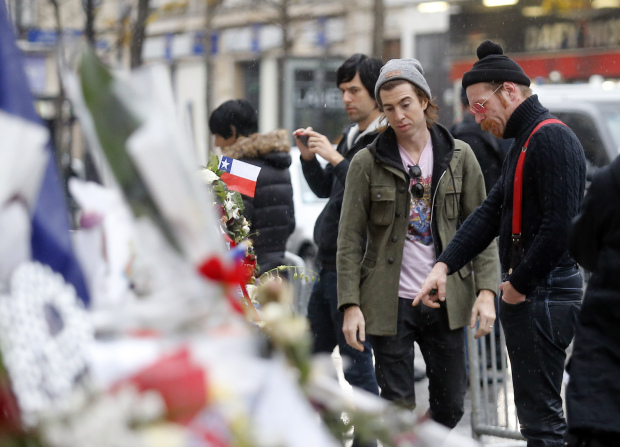 PARIS: Eagles of Death Metal, the band on stage when the deadliest of the Islamic State attacks in Paris took place on November 13, made an emotional visit on Tuesday to the Bataclan concert hall where the shooting took place.

The gunmen stormed the hall while the band from California was performing, killing 89 people attending the concert.

Led by frontman Jesse Hughes, the group laid flowers, shed tears and hugged one another at the tribute site for the victims in front of the concert hall.

They received applause from a crowd of people gathered across the Boulevard Voltaire who braved the rain to be present for the event.

A Parisian named Corinne said a dull pain remained for those who were touched by the tragic attacks. "We feel really very sad. It was a lot of waste, so many young people who passed, who just wanted to have fun," she said.

Bendjouaa Mansouri, who said he lived near the concert hall, said he still can't wrap his head around what happened.

"It's touching. I think of all those who fell here, and it shocks me horribly," he said. "I knew two people who died ... A young girl and the manager of a bar. All these young people who died here ... It's horrible, I don't know why this would happen, this inhuman act."

The Californian rock band also made a powerful appearance at a U2 concert at a packed AccorHotels Arena in Paris on Monday and gave a rendition of Patti Smith's "People have the Power" before performing their own "I Love You All The Time."

"Nothing left except to introduce you to some people whose lives will be forever part of Paris. These are our brothers, they were robbed of their stage three weeks ago," U2 frontman Bono said at the end of the last gig of their Innocence and Experience tour.

The American band's remaining European shows were cancelled in the wake of the attacks in Paris, which killed 130 people in all in shooting at Bataclan, a stadium and bars and restaurants.

Eagles of Death Metal, whose co-founder and Queens of the Stone Age frontman Josh Homme rarely tours with them, said after the shootings they wanted to be the first to perform there when it reopens. He was not at the Bataclan concert last month.

The managers of the Bataclan have said they hope to reopen the well-known venue by the end of next year.