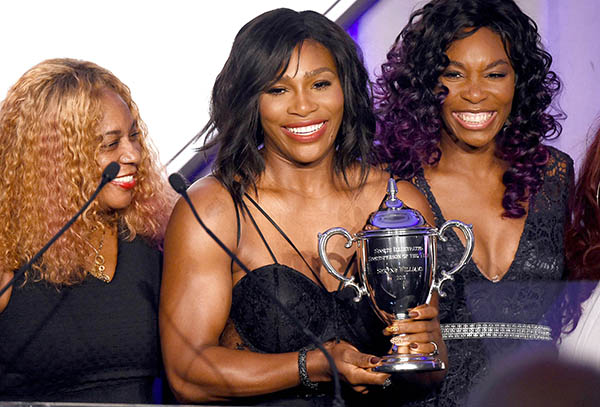 Serena, centre, receives the Sports Illustrated Sportsperson of the Year trophy from her sister Venus as their mother Oracene Price, left, looks on during the ceremony in New York

NEW YORK: Serena Williams added to one of the longest resumes in sports by collecting the Sportsperson of the Year award from Sports Illustrated, becoming only the third individual woman to claim the honour since its 1956 inception.

Serena, 34, won the first three grand slam singles titles of 2015 after taking last year’s US Open to hold all four crowns at once for her second career ‘Serena Slam’.

She logged a 53-3 record, reigned as world number one every week for the second successive year and took her total of Grand Slams to 21, one less than Steffi Graf for most in the Open Era, at an age when most players have been long retired.

“I’ve been doing what I do for over 20 years professionally and that’s a long time to be playing,” Serena said before Tuesday’s awards dinner. “And this is the first time I was ever recognised as Sportsperson of the Year.

“So it really, really meant a lot to me. And being a woman and being only the third to be recognised is pretty awesome.”

Serena said that joining gymnast Mary Lou Retton and speed skater Bonnie Blair on the list of women to claim the award motivated her to succeed on court next year and target even more milestones.

“There’s numbers,” she said at the awards dinner, referring to Graf’s 22 slams and the 24 singles titles won by all-time leader Margaret Court of Australia.

“I never looked at numbers until recently. I want to at least try to reach a couple of numbers that I won’t mention. Just go one at a time and hopefully will be there one day.”

Serena won out over such strong contenders as NBA star Stephen Curry, golfer Jordan Spieth and racehorse American Pharoah, the first to win the US Triple Crown in 37 years, who won the magazine’s readers poll for the award.

Her Sportsperson cover photo for the magazine, picturing her in a black leotard and high heels lounging on a golden throne, also generated a lot of buzz as well as delighting Serena.

“The cover I thought was really amazing,” she said. “You can never be too hot.”