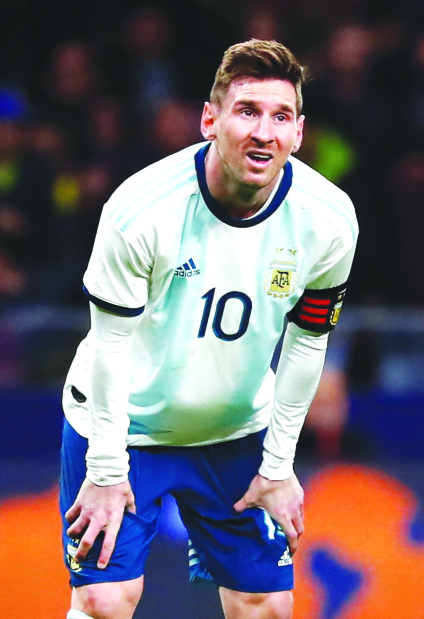 MADRID: Lionel Messi returned to Argentina duty for the first time since the World Cup on Friday but it was a disappointing outing for the forward as they lost 3-1 to Venezuela and he was ruled out of their next match with a groin problem.

Messi showed flashes of brilliance but it was not his night as Venezuela put three past their more illustrious rivals for the first time with goals from Salomon Rondon, Jhon Murillo and Josef Martinez. Lautaro Martinez got Argentina’s consolation.

Messi finished the match but felt some pain in his groin and will sit out Tuesday’s friendly against Morocco in Tangier, the Argentine Football Association said after the game. The injury, described as a flare up of an existing problem, was not thought to be serious. Midfielder Gonzalo Martinez will also miss the Morocco match with a thigh strain.

Messi took a sabbatical after his country’s last-16 exit from the 2018 finals in Russia but he returned with a clean shaven new look to captain the side in the all-South American affair at Atletico Madrid’s Metropolitano stadium.

Venezuela had only beaten Argentina once in 23 previous encounters, but they got the perfect start after five minutes when Rondon brought down a long pass inside the box and crashed a shot past keeper Franco Armani.

Rondon should have made it two with a header in the 40th but the second goal was only moments away as Murillo took advantage of a quick free kick to scamper to the edge of the box and curl a lovely right-foot shot into the far corner of the net.

Lautaro Martinez finished off a superb counter-attack to pull Argentina back into the game after 59 minutes.