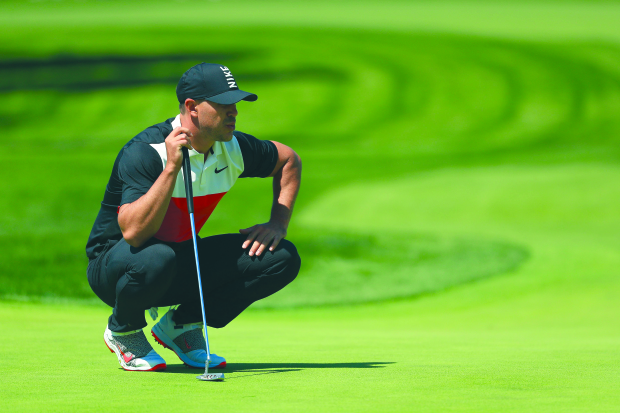 Brooks Koepka lines up a putt on the first green during the first round of the 2019 PGA Championship at the Bethpage Black course on May 16, 2019 in Farmingdale, New York. (Mike Ehrmann / Getty Images / AFP)

FARMINGDALE, NY: A dialed-in Brooks Koepka made an inspired start to his PGA Championship title defence with a dominant display that left him with a four-shot clubhouse lead while Tiger Woods was nine shots back late last night.

Koepka, playing with Masters champion Woods and British Open champion Francesco Molinari, made the gargantuan Bethpage Black layout look easy with a seven-under-par 63 that was the second lowest round in any major championship.

“Seven under, it’s not going to happen every day I know that,” Koepka said.

“I parred two par-fives and missed about a five-footer on number 11 so it could’ve been a hell of a round. Don’t get me wrong, I’ll take it every day but just need to clean a few things up.”

Koepka opened up a four-shot cushion over world number 16 Tommy Fleetwood, who is looking to become the first Englishman in 100 years to win the PGA Championship.

Three-times major champion Koepka began the day on the more difficult back nine and was far from intimidated as he drained a 40-foot birdie putt at his opening hole. He added further birdies at his fifth and ninth holes.

Koepka came out of the turn with his foot firmly on the gas pedal as he birdied the par-four first to grab the outright lead and pulled away with birdies at the third, fifth and ninth holes, the latter where he drained a 33-foot putt.

It was a clinical start for Koepka, who is bidding to become the first golfer to successfully defend a PGA Championship title since Woods in 2007.

Woods, who could return to world number one for the first time since 2013 with victory this week, did well to put a disappointing start behind him but was undone by a trio of late bogeys.

The four-times champion had a trio of three-putts en route to a two-over-par 72 that included two double-bogeys, three bogeys, three birdies and an eagle.

Woods had been six shots off the early pace after a sluggish start but roared out of the turn with two straight birdies.

He got under par for the first time when he sank a 31-foot eagle putt at the par-five fourth but made three bogeys over a four-hole stretch starting at the par-four fifth to leave himself with plenty of work to get into contention.

“It wasn’t as clean as I’d like to have it for sure. Didn’t get off to a very good start,” said Woods.

“Then found my way back around. Got it back under par for the day, and let a couple slip away with a couple bad putts and a couple mistakes at the end.”

Much will depend on how the course changes on Friday, added Woods, wary of afternoon rain forecasts when he will be on the course.

“We’ll see what the golf course offers up,” he said. “It changed quite a bit from when we played this morning to this afternoon. The greens got a lot faster. We’ll see how it dries out over the next few days.

“It’s just going to place another premium on driving the ball in the fairway to get at some of these flags.”

Molinari, who was unable to hold on to the lead he took into the final round of last month’s Masters, was level with Woods after mixing five bogeys with three birdies.

Among the late starters was world number one Dustin Johnson, who set off in the company of Spaniard Jon Rahm and Jordan Spieth, who would complete the career grand slam of golf’s four majors with a win.