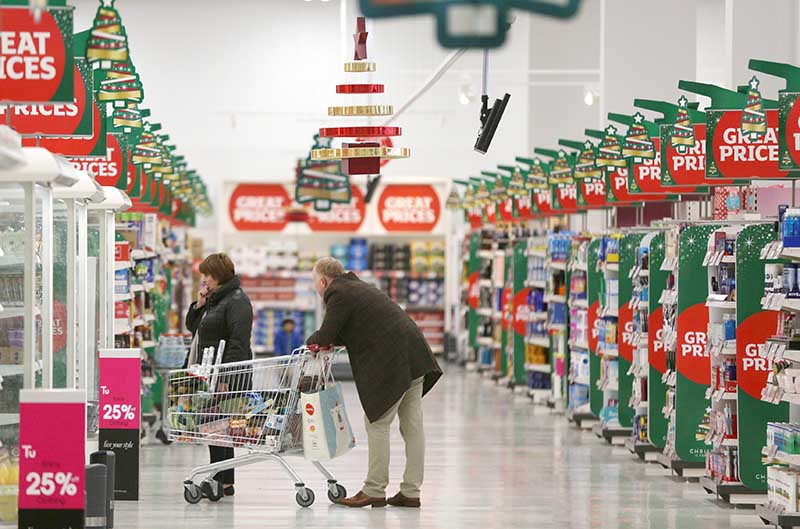 Customers shop at a Sainsbury’s store in London ... strategic move

London: Old-fashioned catalogues, pencils and paper order slips still line many Argos stores. But whether customers shop there, online or using white tablets in some revamped shops, they have access to one of the fastest delivery systems in Britain.

Goods not in stock can arrive within hours, seven days a week, the result of a push to turn the catalogue retailer into a digital business. This has made Argos parent Home Retail attractive to supermarket Sainsbury’s as it prepares for grocery competition from US online giant Amazon.

Britain’s second biggest supermarket made a surprise swoop for Home Retail, also the owner of the Homebase do-it-yourself chain, in November and has until February 2 to make a better offer. Analysts expect one soon after trading updates from Sainsbury’s on January 13 and from the Argos owner on January 14.

They say a deal could speed up Sainsbury’s deliveries, widen its range with electronics, appliances and toys, and optimise space by shutting some Argos stores, selling Sainsbury’s products in others and opening Argos concessions in Sainsbury’s. Homebase is expected to be sold.

“The stakes are now being raised on same-day deliveries for groceries,” Sainsbury’s chief executive Mike Coupe said, when discussing the impact Amazon was having on the UK grocery market, where it is not yet a big player.

“You could argue that they’re already having an impact in the way that people are thinking,” he said, noting that Sainsbury’s was looking at same-day grocery deliveries.

Argos, which accounts for almost three quarters of Home Retail’s sales, wants 75 per cent of sales to have an online element by the end of its five-year digital push in 2018. Already Internet sales account for 46pc of total Argos sales and by February 2016 about 200 stores out of 840 will also be equipped with tablets.