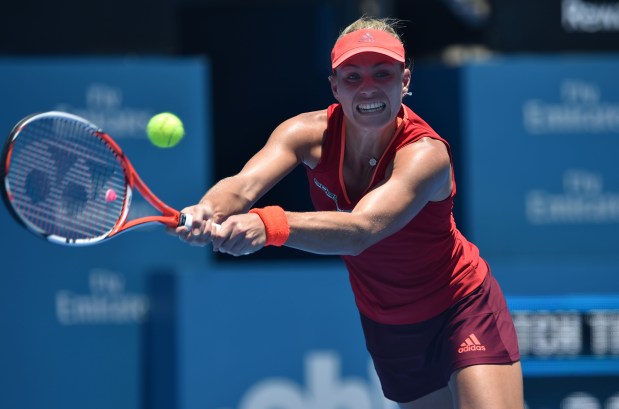 Angelique Kerber of Germany hits a return against Elina Svitolina of Ukraine during their women's singles first round match at the Sydney International tennis tournament in Sydney. (AFP Photo)

Sydney: Angelique Kerber brought to eight the number of the top-10 women's players laid low by injuries or illness in the lead up to the Australian Open when she withdrew from the Sydney International on Tuesday with a stomach illness.

The No. 7-ranked Kerber reached the final of last week's Brisbane International and beat Ukraine's Eline Svitolina in the first round in Sydney before falling ill and pulling out of her second-round match against Russia's Ekaterina Makarova.

"I don't want to risk my health before Melbourne, of course, but I love to come back to the Apia International Sydney and always have good results here, semifinals last year and the final two years ago."

The Sydney tournament has already lost fourth-ranked Agnieszka Radwanska to a leg injury and defending champion Petra Kvitova, ranked No. 6, to a stomach virus, along with Australia's Daria Gavrilova, winner of last week's Hopman Cup, who has an abdominal strain.

Last week, four other top-ranked women either retired or withdrew from tournaments due to injuries, No. 1 Serena Williams (Hopman Cup/knee), second-ranked Halep (Brisbane/ankle), No. 3 Garbine Muguruza (Brisbane/foot) and No. 5 Maria Sharapova (Brisbane/forearm).

Ninth-ranked Lucie Safarova has already withdrawn from the Australian Open with a bacterial infection, leaving No. 10 Venus Williams as the only active member of the women's top 10 without an injury or illness ahead of the tournament, which starts next Monday.

On court in Sydney on Tuesday, Italy's Sara Errani rallied from 5-1 down in the second set, saving seven set points, to beat former No. 1 Jelena Jankovic 7-6 (3), 7-6 (8) to advance to the quarterfinals.

"I was just thinking that I was near my best level, and to just try to keep going, play all the points, and finally was 5-all, and 5-5, 6-all, and really tough the tiebreaker."

Qualifier Monica Puig of Puerto Rico won her fifth match in a row, including three in qualifying, when she beat Anna Karolina Schmiedlova 6-0, 6-1.

Stosur was runner-up at the tournament in 2005.

At the Hobart International, second-seeded Camila Giorgi of Italy beat Nao Hibino of Japan 6-2, 6-3 to reach the quarterfinals.

She is playing in only her third tournament since she sustained a concussion when she fell in the dressing room at the U.S. Open in September.

She also reached the quarterfinals of last week's Shenzhen Open.

"I just felt my timing was a bit off and my serve was definitely not there so at least I pulled through, but I definitely want to be able to play better than that," the former top-five Canadian said.

Sam Querrey and Aljaz Bedene had been locked in a marathon match before Bedene was forced to retire while trailing 6-7 (5), 7-6 (10), 2-1 after nearly two hours.

Meanwhile, Rafael Nadal said is confident of his Australian Open preparations after arriving in Melbourne from Doha, Qatar, where he was beaten 6-2, 6-1 by top-ranked Novak Djokovic in the final of the Qatar Open.

"I played a great tournament in Doha. I lost the final against a player who played better (than) impossible."