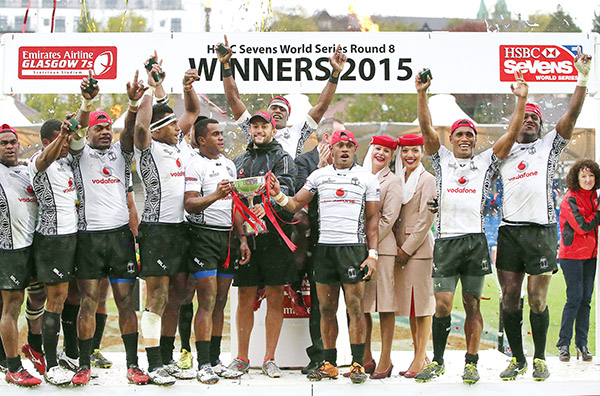 GLASGOW: After being called an embarrassment at halftime, Fiji showed their true colours in a rainy Glasgow Sevens final and overcame titleholders New Zealand 24-17 yesterday.

The result meant Fiji can win the seven world series title for the first time in nine years by reaching the final of the London Sevens, the series closer, next weekend.

“We’ve got ourselves in a terrific position,” coach Ben Ryan said. “Third place (in London) could do it for us, but we want to back-to-backs.”

The Glasgow Sevens worked out perfectly for the Fijians. They qualified for the Rio de Janeiro Olympics by reaching the quarter-finals, and there they blanked nearest rivals South Africa 15-0.

With a first title in Scotland since 2009, Fiji rose in the overall standings from five points behind South Africa to five points in front.

South Africa ended up fifth in Glasgow as the plate winner, while New Zealand, the four-time defending series champions, was eight points behind Fiji heading to Twickenham.

Fiji enjoyed some luck in the final. Savenaca Rawaca scored the first try but New Zealand should have finished the first half out of sight.

Sam Vaka was denied a try for an alleged double movement, and robbed of a second when he was tackled around the neck by Fiji captain Osea Kolinisau, and received only a penalty.

The pressure finally told when tries by Sherwin Stowers and Sam Dickson put New Zealand 12-5 up at the break.

“We were awful,” Ryan said. “New Zealand only had nine players (because of injuries), so we had no excuse to put them to the sword.”

Following the half-time roasting from Ryan, Fiji scored 70 seconds into the new half through Kolinisau, but at the expense of playmaker Pio Tuwai. His injury replacement, Apisai Domolailai, finished the next two tries, the second while New Zealand’s Scott Curry was in the sin-bin, to make it 24-12.

Curry scored from his own chip ahead to give the Kiwis a chance in the last minute, but Fiji turned over ruck ball in front of its line to secure its fourth title from eight tournaments.

New Zealand was consoled by securing a berth in the Olympics when Australia lost its quarterfinal. Australia lost even further ground in the race for the fourth available Olympic spot to England, which finished third in Glasgow and can virtually buy its ticket to Rio.