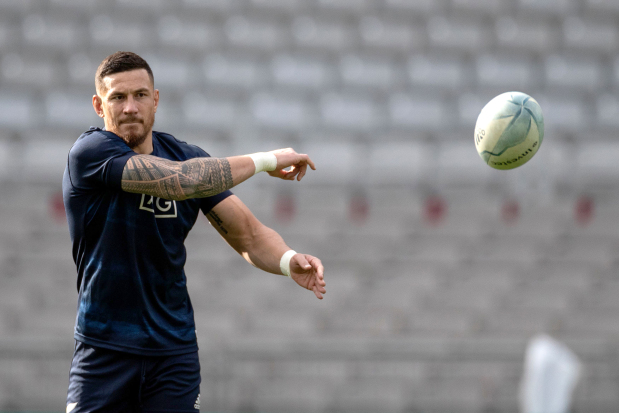 TOPSHOT - New Zealand All Blacks Sonny Bill Williams attends a training session with teammates during their captain's run in Auckland on August 16, 2019, ahead of a Bledisloe Cup game against the Australian Wallabies. - / AFP / Greg Bowker/AFP / Greg Bowker

WELLINGTON: Australia could not only regain the Bledisloe Cup and end an Eden Park hoodoo with a win over the All Blacks today but also end New Zealand’s decade-long reign at the top of the world rankings.

The Wallabies put one hand on the symbol of trans-Tasman supremacy last week with a record 47-26 win in Perth, a victory that put the All Blacks hegemony under immediate pressure with second-placed Wales facing England later today.

England’s 33-19 victory over Wales, however, ensured that Steve Hansen’s side retained the top ranking for at least another week, although that is again up for contention in this weekend’s World Cup warmup games.

The All Blacks have held the number one spot since November 2009, but four sides could end up there by Monday with Wales and Ireland looking to achieve the top position for the first time.

England could also climb to the top of the rankings for the first time in 15 years if they manage to beat Wales by 15 points.

Such is the tightness at the top of the table, that depending on results over the weekend the All Blacks could slip to sixth, their lowest position since the rankings were introduced in 2003.

Both the Wallabies and All Blacks, however, have chosen this week to focus on the Bledisloe Cup with rankings a peripheral consideration.

The All Blacks have faced a week of intense introspection after they were humbled by the near-perfect Wallabies performance last week and have vowed to up their performance to ensure they retain the Bledisloe Cup.

“These moments are built for us as All Blacks and the way you respond is crucial,” captain Kieran Read said yesterday.

“This group is hurting and that’s how it should be. We’ve got a chance to rectify that and we’re excited by that.”

As if facing a wounded All Blacks side was not enough, the Wallabies have not held the Bledisloe Cup since 2002 and to make the task even harder they have not beaten the world champions in New Zealand since 2001 or at Eden Park since 1986.