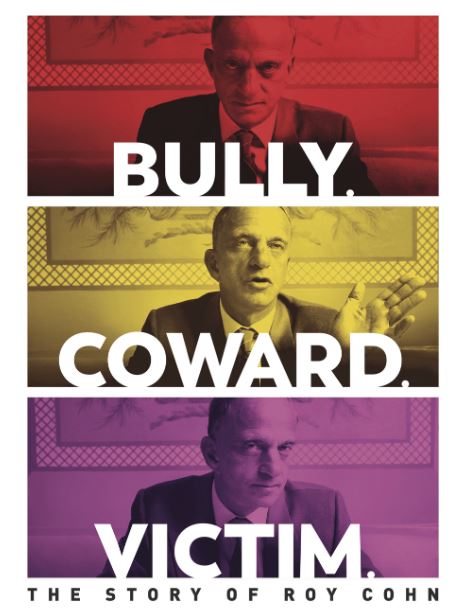 Here are a few of the fun facts you learn from "Bully. Coward. Victim. The Story of Roy Cohn." Cohn, while wealthy, rarely paid his bills. A $1,500 laundry debt, a $10,500 tab he owed the 21 Club, a repossessed car -- we see Cohn's handwritten messages instructing his secretary not to pay anything, because that, quite simply, was his strategy: Don't pay. (The result? He was always getting sued.) In Provincetown, the gay coastal resort-town mecca where Cohn's one-time landlord says she never saw him alone (except when he was in the ocean), he threw dinner parties with a bowl of cocaine next to each plate, and a capsule of the barbiturate Tuinal next to that, in case a guest got too high. Cohn won victory for his clients by settling 60 to 75 percent of his cases out of court, and he once spent an evening with an escort, who had been driven out to his Connecticut estate, doing nothing but talking about a Mabel Mercer record.

For any liberal who's in a rage about the corrupt machinery of right-wing lies (and is there one who isn't?), Roy Cohn is the dastardly gift who keeps on giving. In "Bully. Coward. Victim.," he's a villain out of central casting -- the beady-eyed weasel whispering in Joseph McCarthy's ear, the attorney from hell who rose from the ashes of the Army-McCarthy hearings to become the ultimate New York power player, defending mobsters who became his pals, embedding himself in the rancid center of the city's favor bank. According to the conservative journalist gadfly Taki Theodoracopulos, when Cohn entered the El Morocco nightclub in the late '50s, "He would come in with those hooded lids, looking so ominous. It was like Dracula coming out of his box at midnight." As the years went by, the lids drooped further, the flesh of his face sunk inward, and he came to look like what he was: a reptile rotting from the inside.

In "Angels in America," Tony Kushner mythologized Cohn as a toxic closet case who succumbed (in secret) to AIDS but seemed, on some spiritual level, to have been poisoned by his own hypocrisy. While Kushner's portrait is hard to top, the most recent act of the Roy Cohn saga has been the rediscovery of Cohn as the unacknowledged avatar of our time -- for having mentored Donald Trump and having taught him, more or less, everything Trump knows about how to use threats and lies to flaunt the law by inventing your own reality.

The retro Cohn moment we're in was kicked off by Frank Rich's April 30, 2018, New York magazine cover story, and it has now culminated in the arrival of two documentaries: "Where's My Roy Cohn?," a classically structured, archivally rich portrait by the ace documentarian Matt Tyrnauer (it's currently in theaters), and "Bully. Coward. Victim.," an HBO film that just premiered at the New York Film Festival. For moviegoers, and Roy Cohn addicts, this raises a crucial issue: Which Roy Cohn doc should you see? You'd think there would be a clear-cut answer, but both films have different strengths (and weaknesses), so they wind up complementing each other.

If you want a full-scale, soup-to-nuts primer of the Roy Cohn story -- where he came from, how he rose, who he knew, how his business operated -- then "Where's My Roy Cohn?" is the movie to seek out. Yet when I saw it at the Sundance Film Festival in January, I didn't love it; for all its fascination and craft, the film seemed to be missing a quality I couldn't quite put my finger on. "Bully. Coward. Victim." fills that in. The tales of Roy Cohn's misdeeds are always compelling in a sinister way, yet inevitably they stoke our curiosity about who he was as a human being. These days, he gets stamped with the E-word (evil!) a bit too automatically, as if that explained everything. ("Evil" has become Roy Cohn's ironic liberal brand.) "Bully. Coward. Victim." isn't as authoritative a chronicle as "Where's My Roy Cohn?," but in its loosely anecdotal way it may bring us a notch or two closer to who Roy Cohn was.

The new movie was directed by Ivy Meeropol, the granddaughter of Julius and Ethel Rosenberg, who were convicted, in 1951, of passing atomic secrets onto the Soviets -- and who were executed on June 19, 1953, largely through the efforts of Roy Cohn, who as a 24-year-old prosecutor for the U.S. Department of Justice lobbied hard for the Rosenbergs to receive the death penalty. That was Cohn's stepping stone to fame, and his original act of indecency. (For the record: Julius Rosenberg did pass information onto the Soviets, but not "the secret of the bomb," and Ethel Rosenberg was guilty of nothing. The fact that either of them were executed was an obscenity.)

"Bully. Coward. Victim." digs more deeply than "Where's My Roy Cohn?" did into the central insanity of the Army-McCarthy hearings -- not the fact that American freedom was teetering on the brink, but the fact that Cohn, the ultimate closeted homosexual, exploited his power to the degree that he inadvertently exposed the secret he would have done anything to hide. Cohn and G. David Schine, the handsome heir to a hotel fortune, had gone off together on a tour of U.S. State Department libraries in Europe, rooting out such subversive Communist texts as "The Maltese Falcon." When Cohn tried to pull strings to get special privileges for Schine, it became a headline scandal. As Tony Kushner puts it in the film, "Roy Cohn risked being exposed on national television as a 'pixie.' He went after the U.S. armed forces because he wanted his boyfriend back, and he dragged poor drunk stupid McCarthy into this debacle for the two of them."

The hearings ended in disgrace, yet moving forward without shame became the hallmark of Cohn's method. He was a self-hating Jew who fried two Jewish Communists, a self-hating homosexual who targeted homosexuals as security risks. (It's as if his self-loathing was the fuel for his prosecutorial fire.) "Where's My Roy Cohn?" makes an elaborate essayistic point of how the World According to Donald Trump was really the World According to Roy Cohn, but "Bully. Coward. Victim." benefits, in a way, from confining that message to a single defining example: Cohn first teamed up with Trump when he battled the charges of racial discrimination that had been lodged against Trump's father (and other landlords), countersuing the U.S. for $100 million and comparing government officials to the Nazis and the KKK. It was exactly what Trump does now (the over-the-top accusation as divisionary tactic), and it worked.

In 1981, during a strike of cement workers, Trump built Trump Tower out of concrete using the concrete company of mobster Tony Salerno, in a deal brokered by Cohn. Tellingly, the mob also served as the original fusion point of Cohn and Rupert Murdoch, who in 1977 asked Cohn, who he didn't yet know, to land The New York Post an exclusive interview with Carmine Galante. Mobsters didn't give interviews, but Cohn made it happen. The Cohn-Murdoch-Trump triangle became the perfect corrupt media cabal, with Cindy Adams as the Post gossip columnist who did Cohn's bidding, and Trump grabbing the tabloid spotlight that could magnify his image.

That Roy Cohn had so many friends, from Trump to Barbara Walters to Ed Koch to Andy Warhol, was the driving aspect of his power. He was, somehow, a vulgar scavenger with world-class charm. Yet the film director John Waters talks in the movie about how he would see Cohn on Front Street in Provincetown in the '70s, surrounded by young blond men, and he would despise the fact that Cohn was there. It appeared to Waters that a lot of people at the time simply didn't know who Cohn was. Then again, maybe they just didn't care.