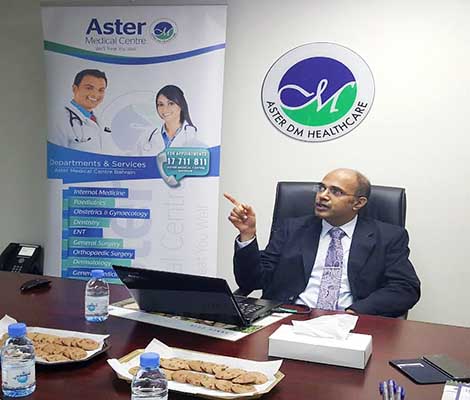 Bahrain: Bahrain’s obesity rate could be trimmed down by as much as 30 per cent if more people opted for robotic weight-loss surgery, according to a visiting expert.

Surgical gastroenterologist and bariatric surgeon Dr Prasad Krishnan said the procedure was already popular in Oman, with around 40 patients travelling to Aster Medcity, in Kerala, every month.

He said the robotic bariatric surgery offered there could play a major role in tackling the obesity problem in Bahrain.

“With proper awareness about robotic bariatric surgery among people in Bahrain, which has a high rate of obesity, it is hopeful that the country could reduce its obesity rate by 20 to 30pc,” Dr Krishnan told the GDN.

“Those people with a Body Mass Index (BMI) above 40 are the ones who would need this surgical intervention.

“According to global statistics, this segment accounts for 10 to 20pc of the obese.”

The GDN reported last month that almost one-third of Bahraini teenagers are overweight or obese, according to the latest official figures.

Health Ministry nutrition section head Dr Nadia Gharib blamed a sedentary lifestyles and bad dietary habits for the startling statistic, which has risen from 24pc to over 30pc in 10 years.

It involves a surgeon using a remote system to control tiny surgical instruments, translating hand movements into smaller, ultra-precise movements of the instruments inside a patient’s body.

The specialist, who is in Bahrain to provide consultations and give a medical education class at Aster Medical Centre, in Gudaibiya, explained the surgery follows guidelines set by the International Federation for the Surgery of Obesity.

“Studies have proved that robotic is safe, feasible and efficient in terms of operative time and length of stay in hospital,” he said.

“The advantage that counts is that the leak rate, bleeding and mortality rate is zero.”

He added the time required for the procedure is one month, which includes pre-operative tests, surgery and post-operative care.

Dr Krishnan will be offering consultations and the medical education class until Wednesday.

He will also discuss new techniques in management of obesity and robotic bariatric surgery with doctors in Bahrain at the K Hotel, Juffair, today from 1.30pm to 2.15pm.

He gave a public symposium on gastritis and gastrointestinal cancer at Sacred Heart Church yesterday.