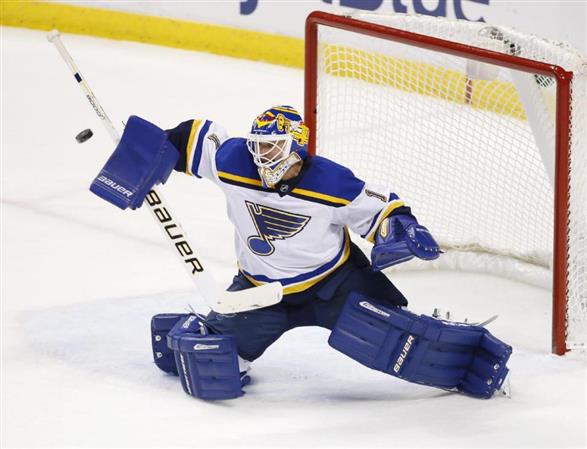 Sunrise, Florida: St. Louis scored three goals in the first period to set up a 5-3 win at Florida on Friday, costing the Panthers a chance to boost their fragile lead atop the NHL Atlantic Division.

Florida's lead in the Atlantic was trimmed to five points ahead of Detroit, which earned a point from a shootout loss against Colorado.

St. Louis continued its push to turn the Central Division into a three-way fight as the Blues made up ground on Chicago and Dallas, while Los Angeles widened its lead in the Pacific Division by winning in overtime at the New York Rangers.

St. Louis' David Backes, Jaden Schwartz and Robby Fabbri all scored in the first period, while Vladimir Tarasenko and Alexander Steen netted later for the Blues.

Los Angeles' Tanner Pearson scored with 1:50 left in overtime to give the Kings a 5-4 win at the Rangers.

Anze Kopitar recorded a hat trick, and Marian Gaborik added a goal for the Kings.

Kevin Hayes and Mats Zuccarello each finished with a goal and an assist for New York, which lost for the first time in 10 days. Viktor Stalberg and Derek Stepan also scored for the Rangers.

Colorado goalie Semyon Varlamov made 43 saves to help the Avalanche win 3-2 at Detroit.

Blake Comeau scored in both the third period and the shootout while Matt Duchene also scored for the Avalanche, who won despite being outshot 45-21.

Jonathan Ericsson and Pavel Datsyuk scored for Detroit, which had won its previous three games.

Steven Stamkos scored the tying goal late in the third period and Tyler Johnson won it 1:04 into overtime.

J.T. Brown and Nikita Kucherov also scored for the Lightning.

Pittsburgh's Kris Letang scored on the final shot of a shootout to lift the Penguins to a 2-1 win at Carolina.

Arizona's Shane Doan had two goals and an assist to become the Coyotes' franchise leader with 931 career points, and helped the Coyotes beat Calgary 4-1 to end a five-game losing skid.