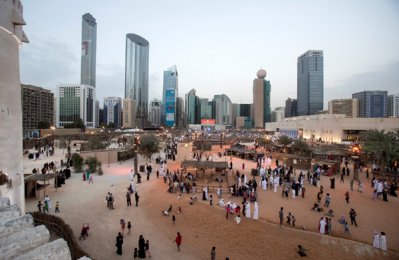 Visitors at the festival

Abu Dhabi’s Qasr Al Hosn Festival saw over 140,000 visitors flock to the capital’s cultural heart from February 3 to 13, an increase of over 15 per cent compared to the 2015 edition.

A true symbol of the birthplace of Abu Dhabi, Qasr Al Hosn is considered as one of the Emirate’s most significant landmarks. The festival, held under the patronage of His Highness Sheikh Mohamed Bin Zayed Al Nahyan, Crown Prince of Abu Dhabi and Deputy Supreme Commander of the UAE Armed Forces, and organised by Abu Dhabi Tourism & Culture Authority (TCA Abu Dhabi) – takes place annually to celebrate the Qasr Al Hosn Fort, the UAE’s identity, and to keep the Emirate’s heritage and values alive and transmitted to new generations.

Mohamed Khalifa Al Mubarak, chairman of Abu Dhabi Tourism & Culture Authority (TCA Abu Dhabi), said: “The number of people that visited the fourth edition of the Festival reflects the symbolic importance and significance held by the iconic Qasr Al Hosn within the heart of the nation and its people. The festival has been a celebration of our rich history and culture and an opportunity to share with the community the ongoing conservation works and the comprehensive process of preservation, restoration and rehabilitation of the fort and its surrounding. This year, the festival has showcased seven elements currently inscribed on the UNESCO Representative List of the Intangible Cultural Heritage of Humanity and visitors had the chance to fully immerse themselves in the UAE cultural heritage.

“Conserving our traditions and sharing them with the community remains one of our main priorities. This year, over 300 Emirati students from nine different universities participated in the Qasr Al Hosn Festival as Ambassadors, and we the festival programme engaged with almost 3,000 school students from across the emirate,” added Al Mubarak.

This year, festival visitors were also able to live an immersive unforgettable fort tour experience that traced the evolution of the Fort for more than 200 years, with more than 10,300 people joining the 10 minute audio visual experience.

Modern heritage was celebrated in the Cultural Foundation Building with areas from the Cultural Foundation being re-opened to host a series of interactive activities aimed at celebrating the Building’s collective memory and bringing it back to life. Cultural Exhibitions were organised to narrate the story of the nation and its people, such as: the Anatomy of a Photograph: Iconic Images from the Past exhibition, the unique Archives & Memories: Capturing the Nation’s Story exhibition in collaboration with the National Archives, Crown Prince Court, Abu Dhabi Media Baynounah TV, and ADNOC/ADCO; in addition to a collection of testimonials from previous visitors about this symbolic structure in Recollections of the Cultural Foundation.

The outdoor Cultural Foundation amphitheatre was a successful area that hosted a rich poetry programme with renowned Emirati poets reminding the visitors about the important role poetry holds within the UAE culture. In addition to the poetry programme, the amphitheatre also hosted the special ‘Memory of the Emirati song’ programme that presented eleven Emirati performers celebrating the memory of the UAE popular music heritage. In total, the double-daily performances drew an audience of over 3,000 poetry and music lovers.

The Cultural Foundation Building also hosted the popular Gahwa experience, where more than 4,600 diners enjoyed a full menu, including main dishes, of traditional Emirati food and refreshments the restaurant and outdoor terrace.

A full range of interactive programmes were featured across the festival’s five Qasr Al Hosn, Marine, Desert, Abu Dhabi Island and Oasis zones, with their respective Pavilions – introduced to this year’s Festival to allow greater visitor participation, with over 9,000 families being led by 630 traditional cast and demonstration experts

Almost 15,000 visitors also enjoyed numerous live performances hosted on The Festival Stage inspired by Emirati cultural heritage. These included The Sky Show’s enthralling display of speed and agility by the birds of Al Ain Zoo, The Night Safari’s educational tale of adventure and a lively cast of characters in the Arabic social drama, Bab Al Khair.

With five entrances to the festival and a 5 per cent increase in site area to almost 47,000 square metres, the festival’s busiest day welcomed almost 20,000 visitors – the highest ever single-day attendance recorded. – TradeArabia News Service