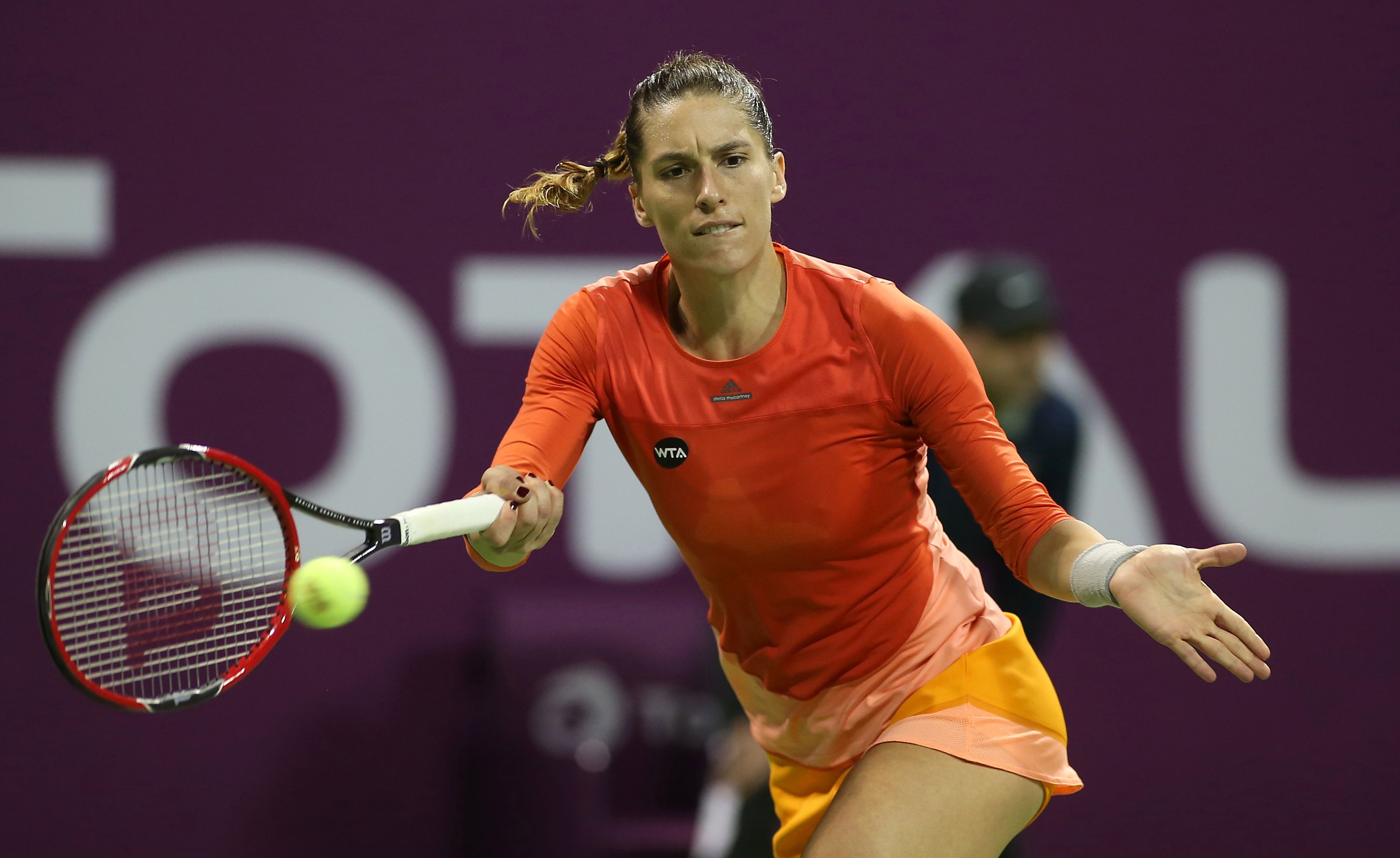 Petkovic returns the ball to Ostapenko

Petkovic pulled a muscle in her left thigh and despite extensive on-court medical treatment quit when trailing 7-5, 1-0 against 18-year-old Ostapenko, a former Wimbledon Junior champion, who will meet Spain's Carla Suarez Navarro in Saturday's final.

The pair met at Wimbledon last year when the Latvian surprisingly won in straight sets.

Petkovic, who dumped out fourth seed Garbine Muguruza in the quarter-finals on Thursday, said she could not continue after dropping her first service game of the second set.

"I pulled my left thigh," the German said.

"My left thigh in the front, I pulled a muscle a little bit. Maybe the third game, I'm not sure. Second, third, quite in the beginning.

"I felt it was sore. My whole left leg was kind of sore after the match yesterday, but with a little treatment, it got better. I did a sprint, I'm not sure. Then I pulled my muscle a little bit.

Petkovic, whose career has been blighted by injury, said she hoped the latest setback would not rule her out for a long time.

"It doesn't feel super bad. I hope that it's not a long matter of time. I felt like I stopped right on time before I did something worse to it."

The German, ranked 27 in the world, had stormed into a 5-1 lead at the beginning of the match, but her leg injury meant her advantage was quickly lost.

After losing her serve at 5-4 Petkovic then had 10 minutes of on-court medical treatment, during which her left thigh was heavily strapped and she also received treatment on her back.

But no medical assistance could delay the inevitable and Petkovic lost the first set 7-5, before retiring at the start of the second, one hour and 18 minutes into the match.

Ostapenko sympathised with her opponent, saying: "I feel really great, but I feel pity for Andrea."

The Latvian said Saturday's game, which will be her second WTA final, would be the biggest match of her career so far.

In the evening's first match, Suarez Navarro breezed past the highest seed left in the competition, Agnieszka Radwanska, dropping just two games in a 6-2, 6-0 victory.

Suarez Navarro now has a chance for revenge after Ostapenko dumped her out of Wimbledon last year in a shock victory. The Latvian won 6-2, 6-0 in the opening round at the All England Club.

The Spaniard also has a chance of more success on Saturday after she also progressed to the doubles final in Doha with partner Italian Sara Errani.