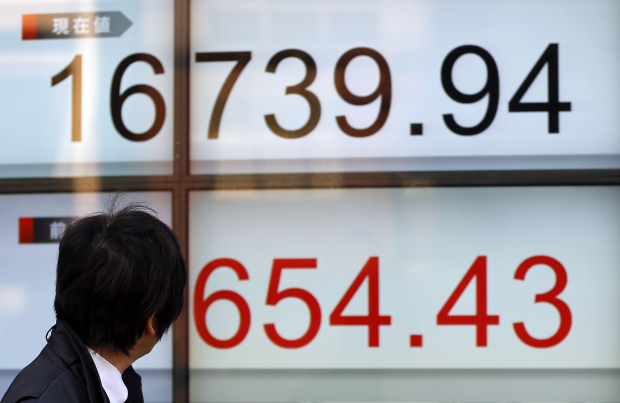 A man looks at the electronic stock indicator of a securities firm in Tokyo, Wednesday, March 2, 2016. (AP Photo)

Tokyo: Tokyo's benchmark stock index soared more than 4 % on Wednesday, extending a rally on world markets as sentiment was buoyed by upbeat US data and hopes that new central bank moves will boost China's slowing economy.

The Japanese market picked up a strong lead from Wall Street, where stocks rallied on Tuesday after reports on the US manufacturing sector, construction spending, and auto sales showed the world's top economy remains resilient even as the global economy sputters.

Japanese shares have been hammered since the start of the year, with Tokyo's two key indices down about 12 %, as a rout on world equity markets hit one of the world's biggest stock markets.

"The US economy isn't as bad as we had expected," Takahisa Odaka, an equity market strategist at Nomura Holdings in Tokyo, told Bloomberg News.

"It'll take time to heal the wound in Japanese shares, but the bottom is getting firmer.

"If US economic data gets stronger and investors become more confident the global economy isn't slowing, we could see some buying back of shares."

On Wednesday, exporter shares got a big boost as the yen slid from levels seen earlier this week -- a plus for the profitability of Japanese firms doing business overseas.

The upbeat US figures helped draw investors out of the yen, which is seen as a safe bet in times of turmoil and is watched as a sign of investor confidence.

Market sentiment has been given a lift after the People's Bank of China late Monday announced it was cutting its reserve requirement for banks.

The move is aimed at encouraging lending and stimulating activity in the world's number-two economy, which is a key driver of global growth.