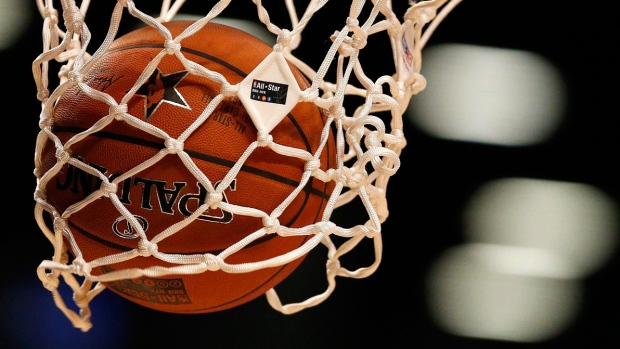 (Image Used For Representational Purpose Only)

San Antonio (51-9) won its 29th straight home game to open the season in its first game following a month-long road trip brought on by the San Antonio Stock Show and Rodeo.

San Antonio joins Golden State as the only teams to clinch spots in the postseason.

Leonard and Aldridge excelled against a Detroit team thinned by injuries to forwards Anthony Tolliver and Stanley Johnson. Aldridge added 10 rebounds and Leonard had six rebounds and five assists for San Antonio, which has won six straight.

Detroit centre Andre Drummond had nine points and 14 rebounds, ending his career-high and the league's season-high of consecutive double-doubles at 13 straight.

Denver, Colorado: D.J. Augustin scored 22 of his 26 points in the fourth quarter to lead six Denver players in double figures as the Nuggets beat Los Angeles in Kobe Bryant's final game at the Pepsi centre.

Emmanuel Mudiay added 22 points and the Nuggets used a 10-0 run midway through the final quarter to gain some separation.

Bryant finished with five points and didn't play in the second half because of a sore right shoulder. Fans kept chanting "We want Kobe" as he sat on the bench with a wrap on his shoulder.

The Nuggets honoured Bryant with a video tribute during a timeout in the first quarter.

The Rockets went 3 of 34 on 3-point attempts and committed 21 turnovers but were able to rally past New Orleans thanks to an off night from Pelicans star Anthony Davis.

With their horrendous shooting performance, Houston became the first team in NBA history to make fewer than four 3s on 30 or more attempts.

But on the 34th attempt, Houston point guard Patrick Beverley delivered the most important shot of the game, a 3-pointer from the corner that gave the Rockets a lead with less than a minute remaining.

Lowry, who had a career-high 43 points in a victory over Cleveland on Friday night before being rested Sunday in a loss at Detroit, added five assists and four rebounds. Toronto (40-19) led the entire second half on the way to its fifth win in six games.

The Jazz (28-32) were led by Gordon Hayward, who had 26 points, six assists and three rebounds. Derrick favours added 15 points and seven rebounds for Utah, which has lost four straight and seven of 11.

There were 11 lead changes and nine ties in the first half before the Raptors took control.

Victor Oladipo scored 17 points and Aaron Gordon had 13 points and 15 rebounds as Orlando coasted to an easy win. Elfrid Payton had nine points and 12 assists.

Derrick Rose led Chicago with 16 points, all in the first half. Pau Gasol had 12 points and Doug McDermott was the only other Bulls player in double figures with 11.

Both teams were on the second game of back-to-backs and it looked it. Orlando hit only 40.2 per cent, while Chicago shot just 38.4 per cent from the field.

John Wall had 14 points and 12 assists, and Beal and Anderson led a Wizards bench that outscored Minnesota's second unit 64-18. Washington shot 50 per cent, hit 11 of 29 3-pointers and scored 50 points in the paint to overcome 17 turnovers.

Ricky Rubio had 22 points and six rebounds, Zach LaVine scored 21 and Karl-Anthony Towns had 14 points, 15 rebounds and five assists for the Timberwolves. Minnesota made 29 free throws to just nine for Washington, but 19 turnovers did in the young Wolves.

Avery Bradley added 17 points as the Celtics won their 12th straight at home. The streak ties Boston's longest since it won 13 straight at the Garden during the 2008-09 season.

Memphis, Tennessee: Mike Conley scored 24 points, including 10 in the fourth quarter, to lead Memphis to a victory over Sacramento.

Conley, who also had five assists, shot 9 of 12, including all three attempts from 3-point range as the Grizzlies won their second straight and sixth in the last eight.

DeMarcus Cousins led the Kings with 18 points and 16 rebounds, but was 7 of 18 from the field. Darren Collison finished with 17 points.

Paul George and Rodney Stuckey added 15 each for Indiana.

Khris Middleton had 23 points to pace the Bucks, who have lost three of four. Giannis Antetokounmpo added 22 and Jabari Parker 18 for Milwaukee.

Greg Monroe scored 11 straight points to start the fourth quarter to bring the Bucks within six. Stuckey came back with 12 straight for the Pacers to push their lead back to double digits.

The Bucks rallied late. Jerryd Bayless was fouled as he made a slashing layup with 16.4 seconds. He made the free throw to cut Indiana's lead to three. George missed two free throws with 14.9 remaining. After a timeout, Middleton's 3-point attempt clanked off the rim with 5.9 seconds left.

Philadelphia, Pennsylvania: Kemba Walker scored 30 points and Cody Zeller had 15 to lead Charlotte to a victory over Philadelphia.

Marvin Williams and Jeremy Lin each added 14 points for the Hornets as they continue their climb up the Eastern Conference standings. Charlotte won for the second straight night and has won 10 of 13 overall.

The Hornets let the Sixers hang around for 2 1/2 quarters before closing the third on a 14-4 run. Courtney Lee hit a 3-pointer that sparked Charlotte, and Walker scored 11 in the period.

The Hornets became the latest team to top 100 points against the 76ers, reaching that mark with 5:26 left. The Sixers have allowed 100-plus in nine straight games and more than 120 points four times during that span.