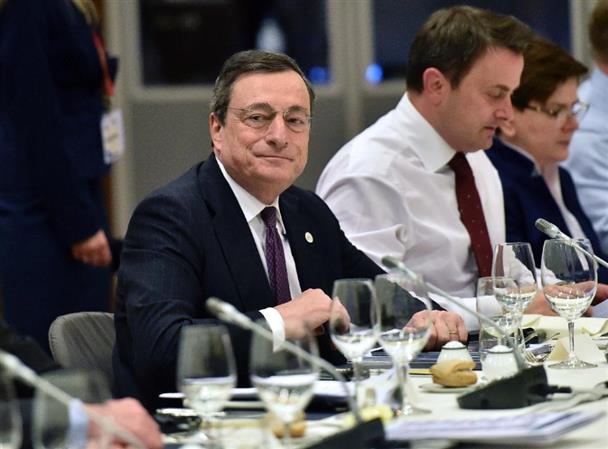 After disappointing financial markets with what were widely to perceived as half-hearted measures in December, ECB chief Mario Draghi will announce bolder policy moves this time round, central bank watchers predicted (AFP Photo)

Frankfurt: The European Central Bank will almost certainly announce new stimulus measures at its policy meeting next week, analysts said, as eurozone inflation turned negative and the economic outlook continues to cloud over.

After disappointing financial markets with what were widely to perceived as half-hearted measures in December, ECB chief Mario Draghi will announce bolder policy moves this time round, central bank watchers predicted.

These were most likely to include a further cut in interest rates, an increase in the volume of bonds it buys each month under its so-called quantitative easing or QE programme and a further extension of that measure beyond its current timeframe of March 2017.

"The ECB has signalled a further loosening of monetary policy at its forthcoming meeting," said Capital Economics economist Jonathan Loynes.

"And while December's under-deliverance highlights the risk of another disappointment, the deteriorating economic outlook should persuade the governing council to be bolder this time," the expert said.

With area-wide inflation back in negative territory -- it fell to minus 0.2 percent in February for the first time in five months -- and eurozone growth not expected to pick up any time soon, the case for further stimulus measures is clear, said Berenberg Bank economist Holger Schmieding.

"Amid heightened uncertainty about the world economy, rising political risks in Europe and renewed concerns about the health of the European banking system, financial volatility will likely impair the transmission of the ECB's current monetary stimulus to the real economy for a while," Schmieding said.

"To bring the economy back to trend growth nonetheless, the ECB needs to do more."

Capital Economics' Loynes predicted a cut in the key deposit rate from minus 0.30 percent to minus 0.5 percent and an increase in the monthly QE purchases from 60 billion euros ($66 billion) to 80 billion euros.

The deposit rate is the interest the ECB usually pays banks for the excess liquidity they park with it overnight.

But it has been negative since June 2014, meaning the ECB effectively charges the banks for using the facility in the hope that they will instead lend it out to businesses and companies to get the economy moving.

However, banks complain the currently ultra-low interest rate environment is eroding profits and pushing the deposit further into negative territory could harm them further still.

Commerzbank economist Michael Schubert suggested the ECB might therefore introduce a tiered interest rate scheme to ease the burden on banks, whereby lenders would pay a lower or no penalty rate at all up to a specified amount of excess liquidity.

"A tiered interest rate would probably send a clearer signal, as monetary policy does not only depend on the size of the rate cut, but also on the scale of possible additional action," Schubert argued.

"If a tiered rate system were introduced, the burden on banks would rise less strongly and the deposit rate could be cut more sharply than if the ECB stuck to a universal penalty rate."

But Berenberg Bank's Schmieding said Draghi might have difficulty communicating such a move to the markets.

"It could be technically difficult to define the dividing line between 'normal' and 'excess' deposits," he said.

Furthermore, "communicating to markets a decision that cuts one interest rate (on excess deposits) while raising an interest rate at the same time (reduced penalty for 'normal' deposits) could tax even Draghi's presentation skills quite severely," Schmieding said.

A number of governing council members, notably Bundesbank chief Jens Weidmann, are opposed to additional stimulus measures. And the minutes from the December meeting, published in January, revealed that "some members" believed "that the existing policy measures were working in the right direction and more time should be given for them to unfold their full effect ... before adopting further monetary policy measures."

Nevertheless, the ECB's own staff economic projections, scheduled to be published on Thursday, are likely to provide the necessary ammunition to overcome such caution, analysts said.

"What's more, the risks are firmly on the downside," the expert argued. "Against this background, the vital importance of not disappointing market expectations again should be evident even to the more cautious members of the governing council."