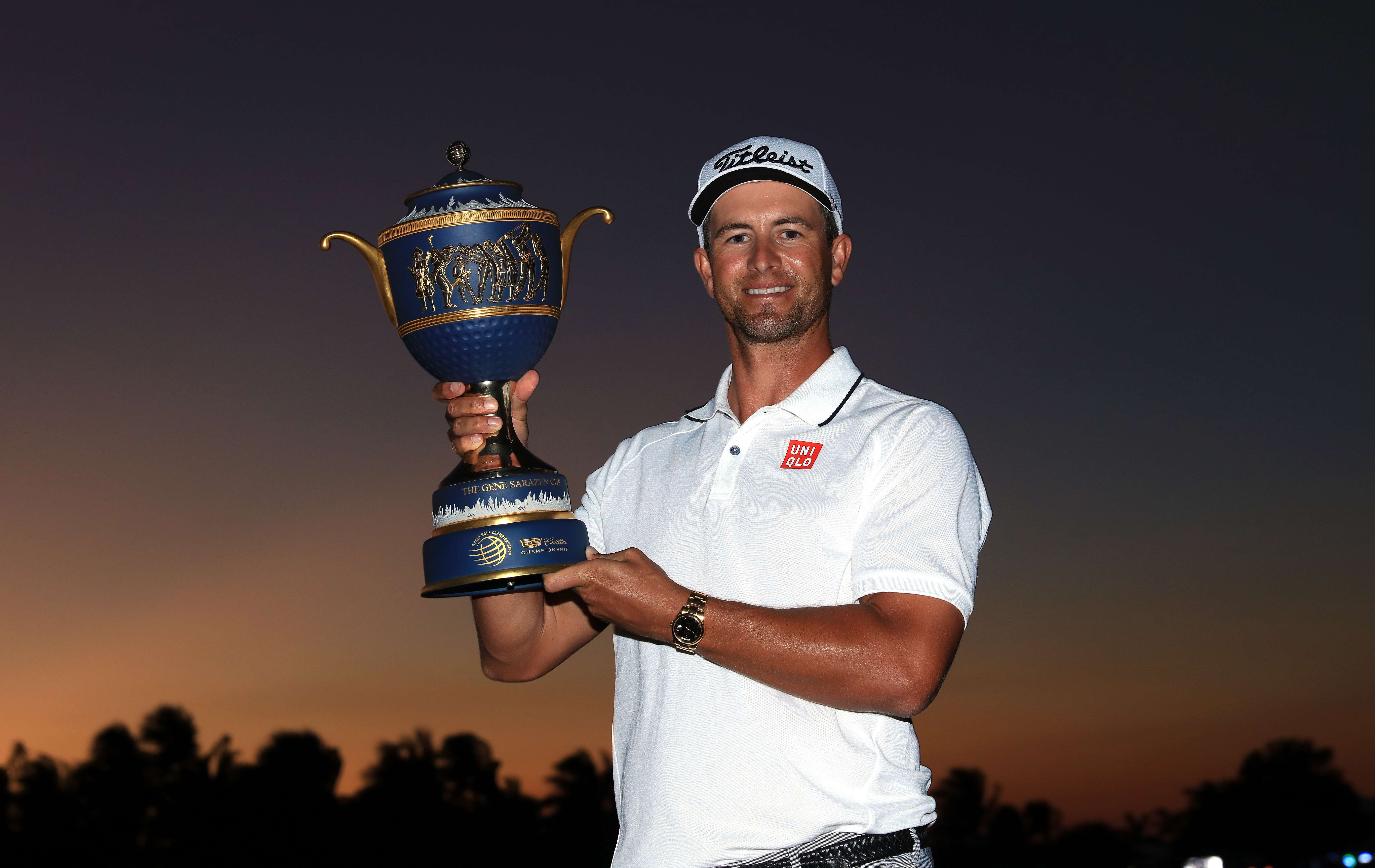 Miami: Adam Scott made two double bogeys in the first five holes then roared back with six birdies over the next nine to fire a final-round 69 and claim the World Golf Championships Cadillac Championship.

The 35-year-old Australian, whose lone major crown came at the 2013 Masters, won in back-to-back weeks after capturing the nearby PGA Honda Classic last Sunday.

Scott, who was second to US star Bubba Watson at Riviera two weeks ago, took his 29th worldwide triumph and 13th US PGA event victory with a 72-hole total of 12-under 276 to edge two-time Masters champion Watson by a single shot at Doral's Blue Monster course.

Scott said Sunday he feels like when he is playing his best he cannot lose.

"I feel that is where my game has been the past couple of weeks and I'd like to keep it there the next few weeks," Scott said. "To win back-to-back weeks feels great. I hope to keep it going."

Scott, expected to rise three spots to sixth in the world rankings, has had to adapt a conventional putting style after a ban started in January on the anchored-style putting he used for many years.

But Scott appears to have shaken off the switchover, having bounced back from a quadruple bogey to win last weekend and double bogeys at the third and fifth holes on Sunday for impressive titles.

"I've used my experience to my advantage the last couple of weeks," Scott said. "I know even though you don't want quads and doubles you still have a chance. I was able to play through it."

After his early stumble, Scott bounced back with his birdie binge, including three in a row to begin the back nine and another at 14 after he put his approach three feet from the cup and made the birdie putt to reach 12-under.

That put Scott two ahead of Willett, Watson and Mickelson, who had birdied 16 after putting his approach two feet from the pin.

Willett blasted his tee shot at the par-4 16th into a greenside bunker then blasted out to four feet and made the putt to reach 11-under, trimming Scott's lead to one.

And Watson followed with a nine-foot birdie putt at 17 to reach 11-under as well, adding to the tension on Scott.

But Willett found the water at 18 to end his threat while Watson managed par to reach the clubhouse one shot down with Scott at the 18th tee.

"It was very difficult," Watson said. "This is the Blue Monster. They want it tough like this. It was a tough test."

There was drama to come. The Aussie's second shot from behind a tree barely cleared the water, the ball clinging to the Bermuda rough on a slope, and Scott needing to get up and down for the victory.

"I thought the wind was strong enough but I hit it so well I flew the hazard and I was lucky enough to get it to stay there," Scott said.

Scott made the most of his good fortune, pitching to six feet and making the putt for the par and all-but sealing the triumph.

McIlroy needed to power a shot 188 yards through palm trees into the cup to match him with an eagle but put his shot into a bunker to end the last threat.