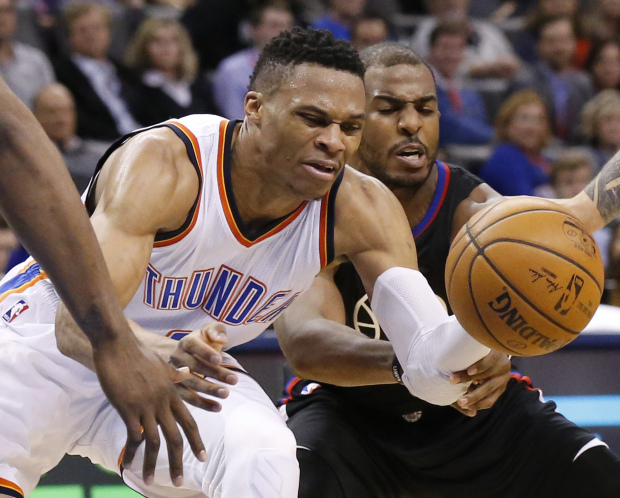 According to STATS, it was the first triple-double with at least 20 points and 20 assists since Rod Strickland did it for the Washington Wizards in 1998.

Oakland, California: Stephen Curry made a zippy crossover to shed his defender then banked in a 55-footer at the halftime buzzer, and Golden State beat Utah to extend its record regular-season home winning streak to 46.

Klay Thompson scored 23 points, and Curry wound up with 12 points and 10 assists on a quiet night in which he struggled to find his stroke early. Draymond Green added 17 points, seven rebounds and five assists as Golden State (57-6) improved to 28-0 at Oracle Arena this season.

DeMarcus Cousins had 29 points and 11 rebounds for the Kings. They trailed 109-100 with under 5 minutes to play before using an 8-0 run to close within one.

Isaiah Thomas scored 16 of his 22 points in the third quarter as Boston turned a three-point deficit into a 16-point lead before coasting to their 14th straight home victory, over Memphis.

The Celtics have not lost in Boston in more than two months, a span that has seen them climb from ninth in the East into the conference's No. 3 seed.

Two nights after surprising East-leading Cleveland — despite being without four starters — Memphis sustained a collapse that was exacerbated by the loss of guard Mario Chalmers in the third quarter to what the team called a right foot injury. Chalmers did not appear to sustain any contact before pulling up and then needing assistance off the court, unable to put any weight on his leg.

JaMychal Green had 17 points and 13 rebounds for the Grizzlies.

Walker shot 9 of 18 from the field and had five 3-pointers for his fourth-straight 30-point game. He also added seven assists and seven rebounds for Charlotte.

Courtney Lee had 16 points and Nicolas Batum added 15 as all five Charlotte starters reached double figures in scoring midway through the third quarter.

Anthony Davis had 40 points and 13 rebounds and Jure Holiday scored a season-high 38 points for New Orleans. The injury-plagued Pelicans fell to 7-24 on the road.

Dallas: Marcus Morris scored 20 points, including two 3-pointers during a decisive fourth-quarter run, and Andre Drummond had 25 points and 17 rebounds in Detroit's victory over Dallas.

Chandler Parsons and Dirk Nowitzki each scored 25 points for Dallas. The Mavericks have lost a season-high four straight games.

Jabari Parker added 23 points, Middleton had 22, and Miles Plumlee scored a season-high 18 for the Bucks. They snapped the Heat's winning streak at five games.

Luol Deng had 20 points and 11 rebounds for Miami. Hassan Whiteside added 23 points and 13 rebounds and Dwyane Wade had 18 points.

After Wade scored on a fast-break layup to cut it to 110-106, Middleton made two free throws. Joe Johnson scored off a pass from Wade but Middleton answered with two more free throws.

Patrick Beverly added 16 points — all in the first half — and Trevor Ariza finished with 15 for Houston. The Rockets, who are currently holding the eighth and final playoff spot in the Western Conference, have won three of their last four to even their record at .500.

Ish Smith scored 21 points and Nerlens Noel and Robert Covington had 17 points apiece for the 76ers. They have lost 13 straight to drop to 8-56.

Vujacic was 7 of 8 from the field and tied a career high by going 6 of 7 from 3-point range. He made his first start since last November and had not played in two of the Knicks' last three games.