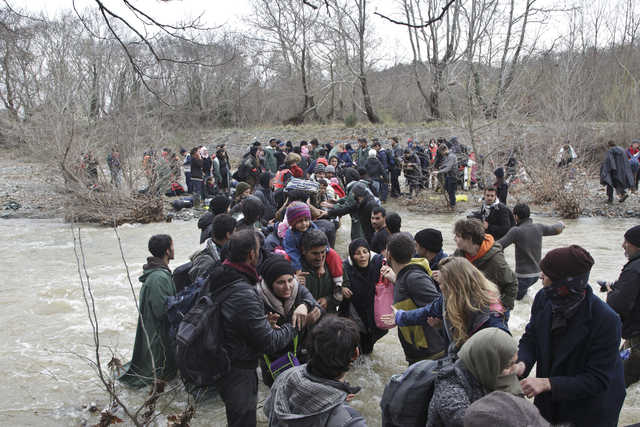 Group of migrants crosses the river north of Idomeni, Greece, attempting to reach Macedonia on a route that would bypass the border fence. (AP Photo)

Hundreds of desperate migrants were stopped by Macedonian troops after wading thigh-deep through a surging river to cross the border from Greece, where thousands have been left stranded after Balkan states slammed Europe's migrant door shut.

The migrants, who had set off from an overcrowded refugee camp on the Greek side, clung perilously to a rope strung between the banks to cross north into Macedonia, bypassing the closed regular border crossing.

Some older family members stumbled after losing their footing in the swift-flowing water, while some parents carried children on their shoulders as they made their way across the make-shift river crossing.

About 20 journalists who had followed the migrants from the Idomeni migrant camp were taken to a police station in Gevgelija, just over the border in Macedonia.

The Greek-Macedonian border – and more specifically the mud-caked Idomeni camp – has become the focal point of the crisis in recent weeks, as thousands of migrants fleeing war in Syria and Iraq were blocked from heading further north.

Over 14,000 people have been stranded at Idomeni in increasingly desperate conditions after the main route to western Europe through the Balkans – taken by over one million migrants since the start of 2015 – was effectively shut down last week.

On Monday some 1,000 migrants set off on foot in search of an alternative route into Macedonia.

By walking through fields and crossing a river, the migrants managed to get around the barbed wire fence that has kept them from entering Macedonia since last week.

But the army surrounded the migrants and made them sit down, with the apparent goal of arranging for their return to Greece.

This was the first large-scale crossing at the border since the frontier was closed last week. Late last month some 300 protesters who tried to force their way into Macedonia were hit with tear gas by police.

But twice they managed to get round Greek police, the first time because there were too many of them, the second time because police vehicles could not follow the migrants into the river.

But they were later stopped by Macedonian troops and the journalists travelling with them taken to a police station.

On Twitter a group using the hashtag #Marchofhope posted photos of people wading through the rushing water, many carrying belongings and others forming human chains to help people across.

Babar Baloch, spokesman for the UN refugee agency, has described the Idomeni camp as "human misery at its peak".

British volunteer Matthew Sheppard said some of the migrants were getting desperate.

"We all know that the only real solution is for war to stop, to cut off the head of the snake. Here we are only doing damage control... We are just trying to put out a fire."

Three Afghan migrants, including a pregnant woman, were found drowned in a river swelled by heavy rain as they tried to cross into Macedonia from Greece, the Macedonian interior ministry said.

Another 19 Afghans who tried to cross with them were taken to a nearby reception centre and four, who were injured, were taken to hospital, said ministry spokeswoman Natalija Spirova Kordic.

The deaths came after several days of heavy rain in the border area which has led officials to instigate anti-flooding measures.

Separately eight migrants were reported missing in the Aegean Sea after their boat sank in rough weather, triggering a rescue operation backed by a helicopter off the Greek holiday island of Kos, the coastguard said.

They are the first to go missing in Greek waters for several weeks, as the coastguard and EU border agency Frontex have begun picking up as many migrants as possible in the Aegean in a bid to reduce the number of deadly accidents.

Some 135,000 people have arrived in Greece from Turkey in flimsy boats since the beginning of January, according to the International Organization for Migration, with 418 perishing on the dangerous crossing.

Wintry weather and the Balkan border closures have failed to deter people from heading to Europe in search of new lives, with 1,700 landing on Greek islands in the last 24 hours.