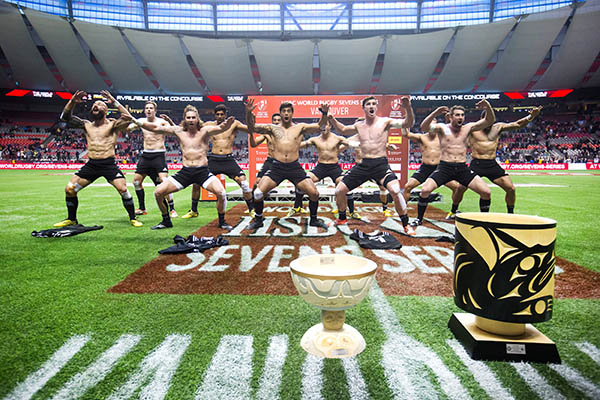 New Zealand added another title to those won in Wellington and Sydney, bouncing back after a quarter-final exit last week in Las Vegas.

“We struggled last week in Vegas with the new team, getting our combinations together but this week we really wanted to go better and I am just so pleased we won the final because it has been a hard week,” said captain Tim Mikkelson.

“We let ourselves down last week and dropped down the table and we really wanted to finish strong in this tournament,” he said.

South Africa struck first, with Rosko Specman speeding through for a try despite the fact that it appeared Kurt Baker had managed to hold him.

New Zealand’s answer came without delay as Liam Messam found Sam Dickson out wide for a try and Gillies Kaka delivered the conversion.

It was Dickson who won the restart, finding Baker for another converted try that saw New Zealand up 14-7 at the half.

New Zealand stretched the lead to 19-7 with a try by Lewis Ormond after the break, and a late try by Seabelo Senatla wasn’t enough for South Africa.

“It was a tough tournament, six real hard games, and I think every game came down to the last whistle and the boys showed some heart,” Dickson said.

Australia rallied to shock Fiji 19-12 in the bronze medal playoff.

John Porch ran in two tries in the second half, Quade Cooper converting one as Australia avenged their defeat by the reigning series champions in the final in Las Vegas.

Fiji had lost Kitione Taliga to a first-minute yellow card but being a man down didn’t prevent them from scoring the opening try through Masivesi Dakuwaqa.

Emosi Mulevoro added another try before Australia answered through Stephen van der Walt, who raced over to make it 12-7 at the interval and set the stage for the comeback.

Fiji were sent into the third-place match by South Africa, who notched a convincing 31-19 semi-final victory. A pair of rapid-fire tries from Sione Molia sealed New Zealand’s 28-19 semi-final win over Australia.

The Sevens World Series, in the spotlight this year thanks to rugby’s return to the Olympic Games at Rio in August, now heads to Hong Kong April 8-10, with tournaments to follow in Singapore, Paris and London.

Fiji maintained their lead in the standings with 106 points, just one point in front of South Africa with New Zealand one further point back in third.