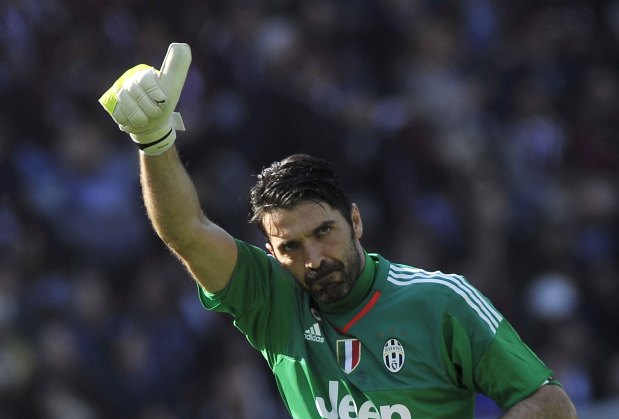 Milan: Champions Juventus took their Serie A unbeaten run to 20 games with a 4-1 derby win at Torino that saw goalkeeper Gianluigi Buffon set a new clean sheet record of 973 minutes.

Juventus made the short trip to the Stadio Olimpico looking to make amends for their spectacular Champions League collapse at Bayern Munich on Wednesday.

And Massimiliano Allegri's men responded to their last 16 defeat in style, Paul Pogba firing the visitors ahead on 33 minutes before Sami Khedira took their half-time lead to 2-0.

Juventus were pegged back three minutes after the restart by Andrea Belotti's spot-kick which ended Buffon's new unbeaten record at 973 minutes, the keeper surpassing Sebastiano Rossi's record of 929 minutes for AC Milan in 1994.

But the champions restored their two-goal advantage just after the hour when Alvaro Morata, who had replaced Paulo Dybala after the Argentine crumpled to the pitch with pain in his thigh after hitting a free-kick, netted a brace before Khedira was sent off at the death for dissent.

Juve's 22nd win left them three points ahead of Napoli, who saw Gonzalo Higuain hit a brace to take his league tally to 29 goals in a precious 3-1 win at home to Genoa.

Allegri admitted after the game: "It was a great win because it's helped to put what happened in Munich behind us.

"It wasn't an easy game for us but the lads did well to keep Torino's chances down and, although I had to replace Dybala, it worked out well for us with Morata in the end."

Juve's hopes of seeing Genoa cause an upset at the San Paolo were given early momentum when Tomas Rincon grabbed a shock 10th-minute opener for the visitors.

But Napoli spurned several clear chances before Higuain levelled on 51 minutes and then sent the stadium into raptures with his second nine minutes from time, a superb curling effort.

With two minutes remaining, Higuain made way for Omar El Kaddouri who seized the day with his maiden Serie A goal at the death.

Napoli's win is all the more valuable in the light of Roma's 1-1 draw with Inter Milan, which left the Giallorossi in third but now seven points adrift of second place.

But Higuain is taking nothing for granted, telling Sky Sport: "These are three really important points for us ... but we've got eight finals left to play this season."

Yet Napoli's grip on the second automatic qualifying spot is tight, while Roma's hold on the last Champions League spot remains under threat from Fiorentina and Inter, who are five points further adrift in fourth and fifth.

Juve were devastated by their reverse in Munich, where Thomas Mueller scored a 91st-minute leveller for the Germans to take the decider into extra-time, before Bayern sealed a 6-4 aggregate win.

But despite missing defender Giorgio Chiellini and midfielder Claudio Marchisio through injury and losing Dybala early on, Juve had a great day at the office.

After Pogba curled a free-kick round the wall on 33 minutes, Khedira waltzed through the middle to poke the ball home on 42 minutes.

Torino were handed a lifeline by Belotti's spot-kick, which left Buffon rooted to the spot but with a new Serie A record in his possession.

But their hopes were ended by a series of refereeing decisions that left Torino coach Giampietro Ventura fuming.

Maxi Lopez's leveller was wrongly chalked off for offside and Juve defender Alex Sandro was lucky to escape conceding a penalty with a borderline challenge on Bruno Peres.

Ventura lashed out: "Alex Sandro should have been sent off, and in the second half we levelled 2-2 only to see the goal chalked off.

"How can the referee get that wrong? I have great respect for Juventus, who are a great side but today I can't accept that. They should show us some respect as well."