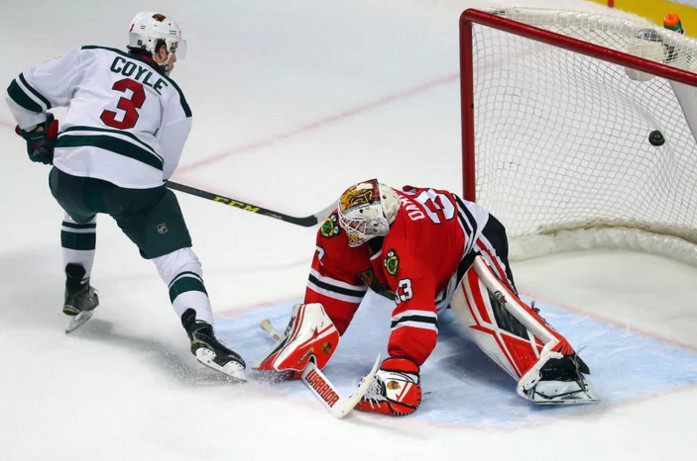 Penguins rookie Tom Kuhnhackl had a goal and two assists, and Pittsburgh surged back with four consecutive goals to manhandle the NHL-leading Washington Capitals 6-2 Sunday night and move up the standings.

The Penguins, clinging to the second Eastern Conference wild-card spot less than two weeks ago, won their season-high-tying sixth in a row to climb past the New York Rangers and into the Metropolitan Division's second playoff slot via tiebreaker. They earned their 10th victory in 13 games ioverall.

Jakob Silfverberg scored with 58.6 seconds left in overtime to lift the Anaheim Ducks to a 3-2 victory over the Winnipeg Jets at MTS Centre on Sunday afternoon.

Silfverberg was stopped on a breakaway by Jets goalie Michael Hutchinson but then flipped in the rebound to give the visitors the win.

Ryan Kesler, with his 17th, and Jamie McGinn, with his 19th, also scored for Anaheim while John Gibson made 27 saves.

Goaltender Scott Wedgewood made 27 saves in his NHL debut and right winger Devante Smith-Pelly scored the winner in the third period as the New Jersey Devils defeated the Columbus Blue Jackets 2-1 at Prudential Centre on Sunday.

The 23-year-old Wedgewood, a third-round pick by the Devils in 2010, spent parts of the past four seasons in the AHL.

Sean Monahan scored twice and added an assist to lift the Calgary Flames to a 4-1 win over the Montreal Canadiens on Sunday night at the Bell Centre.

Michael McCarron scored the lone goal for the Canadiens.

Charlie Coyle scored the tiebreaking goal to lift the Minnesota Wild to a 3-2 shootout win over the Chicago Blackhawks on Sunday night.

Erik Haula and Nino Niederreiter scored for the Wild during regulation. Minnesota (34-28-11) beat the Blackhawks for the sixth consecutive regular-season game, including a 4-0-0 mark this season. The Wild improved to 11-6-1 under interim coach John Torchetti.

Chicago (42-24-7) dropped to 2-4-2 in its past eight games. Andrew Shaw and Richard Panik scored during regulation for the Blackhawks.

The Colorado Avalanche rested No. 1 goalie Semyon Varlamov on Sunday. The Avalanche's two top scorers -- Nathan MacKinnon and Matt Duchene -- were out with injuries.

However, thanks to a 26-save effort from backup Calvin Pickard, Colorado still had enough in the tank to beat the Edmonton Oilers 3-2. With the win, the Avalanche remains one point ahead of the Minnesota Wild -- who also won Sunday -- for the final playoff spot in the Western Conference.

James Reimer pitched his second shutout as a member of the Sharks, leading San Jose to a 3-0 win over the Arizona Coyotes on Sunday at SAP Centre.

Reimer turned away 25 shots for his 13th career shutout as the Sharks won for the fourth time in six games to again move within one point of second-place Anaheim in the Pacific Division. The Ducks beat the Winnipeg Jets in overtime earlier Sunday.