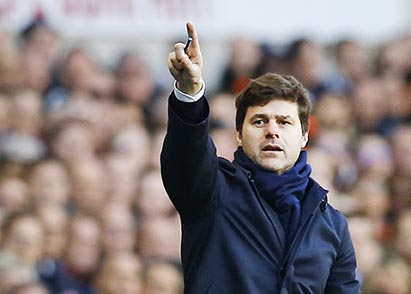 London: Mauricio Pochettino has warned Leicester that title-chasing Tottenham are ready to step on the gas as the race for pole position in the Premier League hots up.

Thanks to Harry Kane’s latest heroics in Sunday’s swaggering 3-0 win over Bournemouth, Pochettino’s second placed team are just five points behind Leicester heading into the final seven games of a gripping title battle.

Kane took just 44 seconds to open the scoring at White Hart Lane and he added a superb second before Christian Eriksen made it three.

For the first time since winning the English crown in 1961, Tottenham find themselves in the thick of the closing stages of a title race and, on the evidence of their emphatic dismissal of Bournemouth, they are the most credible candidates to take advantage of any slips from Leicester.

And with their Europa League campaign ended by Borussia Dortmund last week, Tottenham boss Pochettino believes his team will benefit from having extra recovery and training time as they try to overhaul the shock leaders.

“After the international break we’ll play one game every week and we’ll have time to prepare games in a different way.

“It’s the same for training, we can improve and do a lot of things that were impossible before.

“We are in a moment where we need to see our future in a very good way. It’s important to keep working hard and fight in every game.”

For Tottenham to catch Leicester, Pochettino knows he needs to keep Kane fit and firing on all cylinders, so he will be keeping his fingers cross the England forward comes back from the forthcoming international friendlies against Germany and the Netherlands with a clean bill of health.