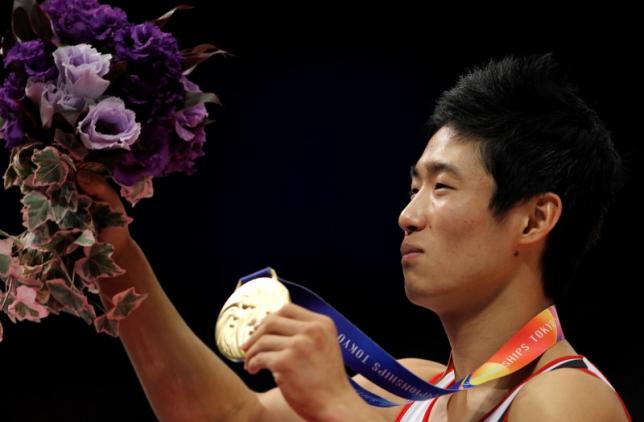 Gold medalist Yang Hak-seon of South Korea shows his medal on the podium during an awarding ceremony after competed on the vault at men's apparatus final at the Artistic Gymnastics World Championships in Tokyo October 16, 2011. (Reuters Photo)

Yang, also vault world champion in 2011 and 2013, suffered the injury during floor practice at the Taeneung National Training Centre in Seoul on Tuesday and had surgery the following day.

"Even if Yang recovers before the Olympics, he will not have had enough training to compete.

"He may demonstrate skills in the air, but it will be difficult for him to perform at the Olympics if he can't land well."

The 23-year-old Yang, who had been practising for the first round of the national trials next month, soared to the top of the world in the vault on the back of his signature triple-twisting front somersault, which is named after him.

It was the successful execution of this manoeuvre, which carried the highest level of difficulty coefficient, that set him on his way to the gold medal as a teenager at the London Olympics.

Yang, then a student who supported his impoverished parents from his Korea Gymnastic Association stipend, has been regularly sidelined by injuries since his London triumph, however.

"Yang was managing his condition more carefully than he did for the 2012 London Games," the official added.

"He is hurt and feels sadder than anyone else."

North Korean Ri Se-gwang, who took Yang's vault title at the 2014 world championships and retained the crown in Glasgow last year, will be favourite to strike Olympic gold in Rio in August.