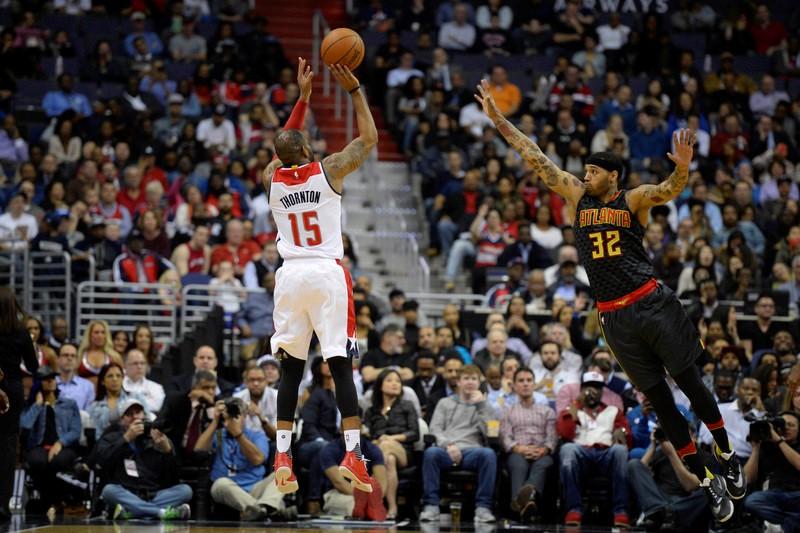 Atlanta had its five-game winning streak snapped Monday by the Washington Wizards. In the conclusion of a home-and-home set against their Southeast Division rival, the Hawks were motivated to return the favour.

Dennis Schroder scored 23 points off the bench and the Atlanta Hawks used a season-high 17 3-pointers to fuel a 122-101 win over the Washington Wizards on Wednesday night.

Paul Millsap had 17 points and Kyle Korver made five 3-pointers for the Hawks (42-30), who kept pace in the Eastern Conference playoff race while exacting revenge after the Wizards triumphed 117-102 Monday in Atlanta.

Trailing 56-52 at halftime, the Hawks took control with a 22-5 run and outscored the Wizards 70-45 in the second half. Washington had won a season-high five in a row

"They had us one day, and we tried to get them back and that is the reason why we came motivated," Schroder said. "Everybody was focused. I think we did a great job tonight."

The Hawks had a season-high 42 attempts from beyond the arc and shot 53.6 per cent from the field. Korver, one of eight Atlanta players with at least one 3-pointer, scored 15 points and Al Horford had 13.

Marcus Thornton scored 23 points and Markieff Morris had 19 for the Wizards (35-36). The loss snapped Washington's momentum and hurt its playoff hopes.

The Wizards fell 2-1/2 games behind Detroit for the eighth and final playoff spot in the Eastern Conference. The Pistons defeated the Orlando Magic 118-102.

Atlanta remains tied with the Boston Celtics for fourth in the East while moving 1/2 game over the idle Charlotte Hornets.

John Wall had 13 points and 10 assists for Washington and Bradley Beal scored seven points. The Wizards' starting backcourt went 8 of 25 from the field after combining for 52 points on 20-of-36 shooting Monday.

"I wouldn't call it a setback," Wall said of the loss. "Tonight, they got the looks, they made them and we didn't."

Trailing 70-67, the Hawks pulled ahead for good by scoring 12 straight points. Schroder, 7 of 9 from the field, dominated his backup point guard counterparts in the stretch with eight points.

"I thought he was great," Atlanta coach Mike Budenholzer said of Schroder.

After a quiet performance in Monday's loss, Korver capped the decisive stretch with his final 3-pointer for a 92-75 lead with 10:03 remaining.

"They got hot in that third quarter span going into the fourth," Morris said. "They made some shots and kind of blew the game open."

Korver's 5 of 10 performance from deep highlighted the difference in games for Washington.

"We just didn't have that same energy level," Wizards coach Randy Wittman said. "We allowed Korver to get 10 3's up. We held him to two shots Monday. We were just a step behind everything."

Atlanta kept pace with the speedy Wall in the second half, holding the All-Star to two points.

Trying to climb over.500 for the first time since being 6-5 on Nov. 24, the Wizards committed 18 turnovers, including 13 in the second half after only nine miscues Monday.

Washington's last six-game winning streak occurred Dec. 8-19, 2014. With only 11 regular season games remaining, now would be a good to start up another surge.

"We still have life, there's still a great chance for us to get into the playoffs," guard Garrett Temple said. "If we win five in a row again, we'll be alright."