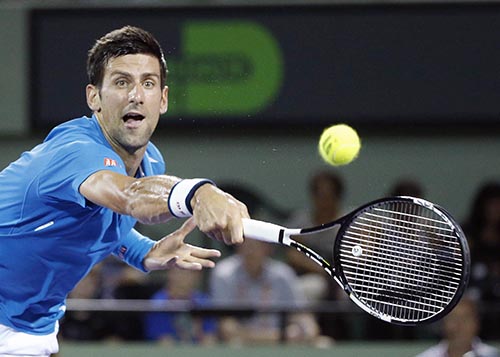 Djokovic returns a shot to Edmund

Swiss fourth seed Wawrinka, who has won titles this year at Chennai and Dubai, was ousted by Russia’s Andrey Kuznetsov 6-4, 6-3 while Czech eighth seed Kvitova, the 2011 and 2014 Wimbledon winner, fell to Russian 30th seed Ekaterina Makarova 6-4, 6-4.

Kuznetsov, ranked a career-best 51st, avenged a third-round loss to Wawrinka earlier this month at Indian Wells and made the Swiss his highest-ranked beaten foe, surpassing seventh-rated Spaniard David Ferrer from the second round of Wimbledon in 2014. Kuznetsov fired 23 winners and seven aces to advance in 79 minutes.

Next up for Nishikori, who could meet Britain’s Andy Murray in a quarter-final, is Ukraine’s 27th-seeded Alexandr Dolgopolov, a 6-4, 6-4 winner over Italy’s Andreas Seppi.

On Friday, top-ranked Novak Djokovic made a strong start in his quest for a third consecutive Miami Open title while Roger Federer’s expected return from a two-month layoff was over before it started.

Djokovic, seeking his sixth Miami crown overall and the first “three-peat” since Andre Agassi in 2001-2003, opened by defeating Britain’s 87th-ranked Kyle Edmund 6-3, 6-3 in the ATP and WTA hardcourt event.

Djokovic, who captured his 11th Grand Slam singles crown at the Australian Open two months ago, will face Portugal’s Joao Sousa in the third round today as he tries to add to a 2016 trophy haul that also includes Doha and Indian Wells.

The 28-year-old Serbian is 23-1 this year and has 25 of his past 26 Miami matches, including 11 in a row. But third-ranked Federer, a 17-time Grand Slam singles champion who underwent left knee surgery last month, withdrew from the tournament just hours before his match, citing a stomach virus.

“I have not felt great for a few days and unfortunately it got worse in the last 24 hours,” Federer said. “I was really excited to have my comeback in Miami but I am in no condition to play. I tried to warm up this morning but it was clear that I could not compete.”

The 34-year-old Swiss legend missed the event for the third time in four years. He won at Miami in 2005 and 2006 but has not reached the final since.

Federer has not played since losing to Djokovic in the Australian Open semi-finals two months ago. The next morning, Federer suffered a torn meniscus while preparing to bathe his children.