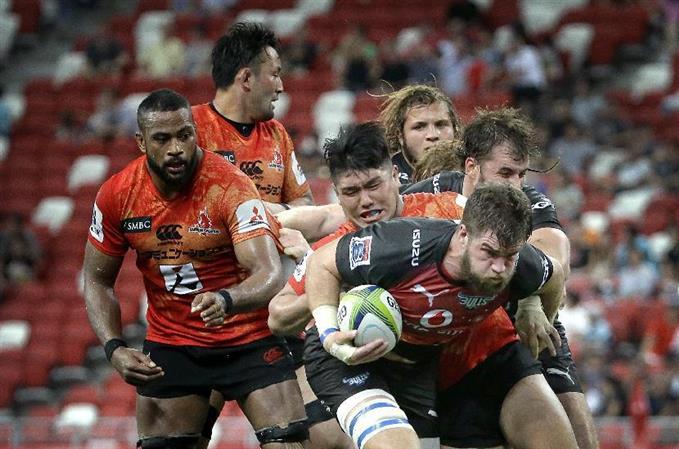 South Africa's Nick de Jager of the Bulls breaks away with the ball during their Super Rugby match against Japan's Sunwolves on Saturday, March 26, 2016, in Singapore. (AP Photo)

Wellington: The Crusaders ended the Sharks' unbeaten record and the Chiefs overcame some serious travel-related obstacles to firm as favourites for a Super Rugby title after the weekend's fifth round of matches.

The manner of their victories was starkly different: the Christchurch-based Crusaders needed a last-minute try to beat the Sharks' 19-14 in Durban while the Chiefs ran in seven second-half tries in Hamilton to take a bonus point from a 54-10 win over the Western Force.

The Crusaders' only loss this season was to the Chiefs in the first round and their wins since over the Blues, the Kings and the Sharks have shown a steady improvement, especially in their attacking game.

After beating the Crusaders, the Chiefs stumbled in a 36-32 home loss to South Africa's Lions, but have since achieved the immense feat of winning successive matches in South Africa, Argentina and New Zealand.

Those wins have placed them atop the overall table after five rounds, a point clear of compatriots the Highlanders and two ahead of the ACT Brumbies, who recovered from last week's loss to the Stormers with a 25-18 win over the Cheetahs in Bloemfontein.

The Chiefs face the Brumbies next weekend in a top-of-the-table clash.

After their unexpected loss to the Lions the Chiefs had to travel to South Africa where they beat the Kings in Port Elizabeth, cross the Atlantic to beat the Jaguares in the first-ever Super Rugby match in Argentina, then return home to beat the Force.

In the course of those matches they travelled more than 20,000 kilometres (12,000 miles) and they achieved Saturday's win at home though they had 12 front-line players out with injury. That left them with a makeshift bench, incorporating several players who had yet to play a Super Rugby match and veteran flyhalf Stephen Donald, recalled to the colours after a five-year absence.

The bench still made an impact in the second half. American-born winger Tony Pulu scored a try with his first touch in Super Rugby and Donald kicked the last conversion.

"I suppose a couple of weeks around the world with a pretty tough travel schedule bonds the boys together," captain Sam Cane said.

Queensland was awarded an early penalty try but the Waratahs went to the halftime break leading 12-7 after Folau's first try resulted from a 45-meter break from Jed Holloway and his second came after the siren had sounded. Queensland edged ahead with two second-half penalties before Bernard Foley put the visitors back in front with a penalty 12 minutes from the end.

All Blacks captain Kieran Read scored the try in the 71st minute which clinched the Crusaders' win over the Sharks in Durban. The Crusaders had been stung by two intercept tries to winger Lwazi Mvovo but took control of territory and possession and proceeded to wear down the Sharks.

The Brumbies opened a 17-point lead over the Cheetahs but tired in the last quarter and just held on to win as the home side, with a try to Sergeal Petersen and a late penalty, took a losing bonus point. Brumbies coach Stephen Larkham hailed the contribution to the win of flanker and Wallaby David Pocock.

"I thought David Pocock had a tremendous game, one of the best games I've seen him have," Larkham said. "Both his work at the breakdown and in the contact area was outstanding."

The Highlanders had their second straight win in Australia, producing a superb defensive performance to beat the Melbourne Rebels 27-3.

Japan's Sunwolves were again narrowly denied their first win in Super Rugby, losing 30-27 to South Africa's Bulls in Singapore, two weeks after losing 32-31 to the Cheetahs at the same venue.

The Hurricanes led by only two points at halftime, 19-17, before going on to take a bonus point from a 42-20 win over the Kings, who remain winless after five rounds.

The Stormers took over in the South African conference lead with a 13-8 win over the Jaquares, handing the new Argentinian side its second home loss in a row at Buenos Aires.