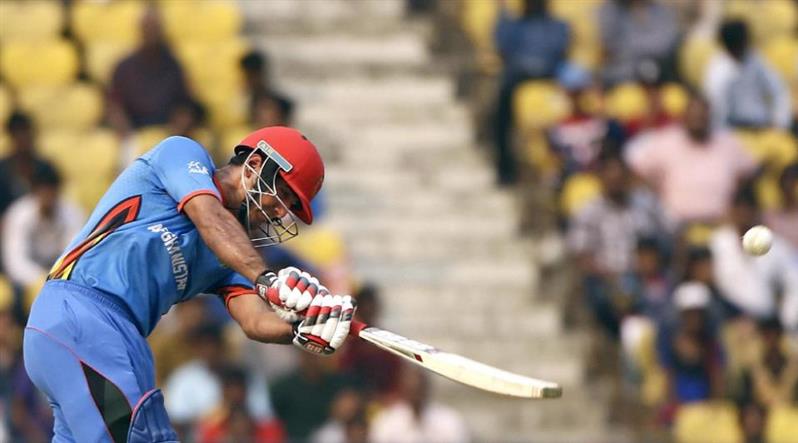 Afghanistan's four-pronged spin attack — led by 17-year-old legspinner Rashid Khan and experienced offspinner Mohammad Nabi who both returned identical figures of 2-26 — restricted the West Indies to 117-8 on a turning wicket after Najibullah Zadran's 48 off 40 balls earlier anchored them to 123-7.

Despite the defeat, West Indies topped Group 1 over England on a superior net run-rate as both teams finished on six points with one defeat and three victories.

West Indies will take on either India or Australia in the second semifinal at Mumbai on Thursday. India and Australia meet later Sunday, with Australia winning the toss and choosing to bat.

"Obviously very disappointed," West Indies captain Darren Sammy said of Sunday's defeat. "But there's no doubt we're not going to let this dampen our spirits. We just need to find a way to chase down those small totals. This was the only game we could afford to lose in terms of winning the cup."

Afghanistan lived up to its promise to at least win one match in the Super 10 stage after earlier putting up brave performances before losing to England, Sri Lanka and South Africa.

"We knew we could defend the total after watching low scoring games here in Nagpur,"Afghanistan coach Inzamam-ul-Haq said. "Our spinners were fantastic today and the fielding was simply outstanding."

In the absence of rested Chris Gayle, West Indies couldn't get the sort of start it wanted as Evin Lewis was out for a duck in his debut T20.

In form Andre Fletcher pulled his hamstring at the end of the sixth over and left the field in pain. That opened the door for Afghanistan to have a crack at the middle order.

Marlon Samuels (5) was baffled by Khan's vicious googly and was bowled off the back foot, and Dwayne Bravo (28) was trapped leg before wicket by Nabi. Denesh Ramdin was stumped by Khan's sharp legspinner after the wicketkeeper-batsman made a pedestrian 18 off 24 balls while Andre Russell (7) was run out by a direct throw from wicketkeeper Mohammad Shahzad to reduce West Indies to 98-6 in the 18th over.

Samiullah Shenwari and Naib fell in the space of six runs and left their team reeling at 56-5 in an attempt to increase the scoring rate.

Zadran and Nabi added 34 runs for the sixth wicket stand — going from 56-5 to 90-6 — before Nabi fell in the 17th over off a brilliant catch which was set up by Sammy. He stretched full length and palmed the ball into the safe hands of Samuels after intercepting Nabi's hard drive at extra cover.

Zadran held the innings together and took the total beyond 120 when he smashed two boundaries in Bravo's last over of the innings with a switch-hit and a crisp drive through the covers.