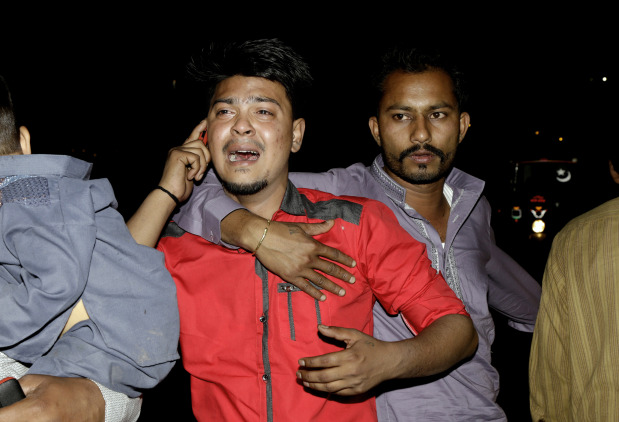 A Pakistani mourns over the death of his relative in a bomb blast, at a local hospital in Lahore, Pakistan, Sunday, March, 27, 2016. (AP Photo)

Lahore, Pakistan: Pakistani authorities hunted on Monday for breakaway Taliban militants who once declared loyalty to Islamic State after the group claimed responsibility for an Easter suicide bomb targeting Christians, that killed at least 70 people.

The attack on Sunday evening in a busy park in the eastern city of Lahore, the powerbase of Prime Minister Nawaz Sharif, killed mostly women and children enjoying an Easter weekend outing. Pakistan is a majority-Muslim state but has a Christian population of more than 2 million.

It was the deadliest attack in Pakistan since the December 2014 massacre of 134 school children at a military run academy in the city of Peshawar that prompted a big government crackdown on militancy.

"We must bring the killers of our innocent brothers, sisters and children to justice and will never allow these savage inhumans to over-run our life and liberty," military spokesman Asim Bajwa said in a post on Twitter.

Jamaat-ul-Ahrar, a faction of the Pakistani Taliban, claimed responsibility for the attack late on Sunday night, and issued a direct challenge to the government.

"The target was Christians," said a faction spokesman, Ehsanullah Ehsan, said. "We want to send this message to Prime Minister Nawaz Sharif that we have entered Lahore."

Lahore is the capital of Pakistan's richest province, Punjab, and is seen as the country's political and cultural heartland.

Sharif's office condemned the blast as a cowardly act and said a response had been ordered, without elaborating.

Lahore, markets, schools and courts were closed on Monday as the city mourned.

Rescue services spokeswoman Deeba Shahnaz said at least 70 people were killed and about 340 were wounded, with 25 in serious condition.

The group has claimed responsibility for several big attacks after it split with the main Pakistani Taliban in 2014.

It declared allegiance to the Islamic State but later said it was rejoining the Pakistani Taliban insurgency.