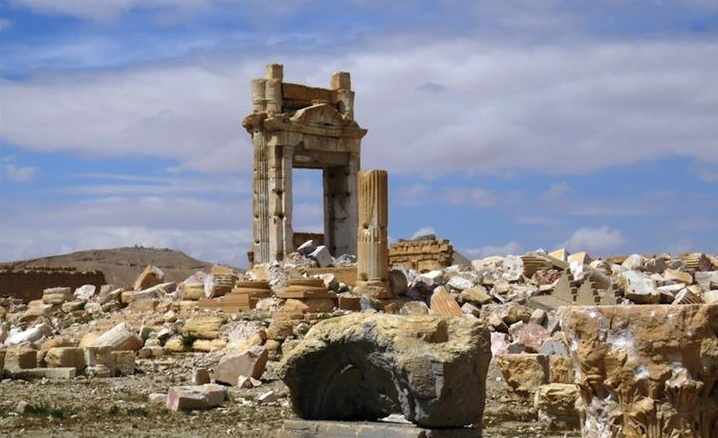 Remains of the Temple of Bel in the historical city of Palmyra after it was blown up by Islamic State group jihadists. (AFP Photo)

Moscow: The Syrian army's successes and its strong support from Russia will help accelerate a political settlement to the country's civil war, President Bashar Al Assad said, as the two allies maintained an offensive against Islamic State militants.

That military advance, which opened up much of Syria's eastern desert stretching to the Islamic State strongholds of Deir Al Zor province and Raqqa, came after two weeks of indirect talks at the UN in Geneva.

Assad told RIA that the Syrian government delegation "displayed flexibility" at the talks with the opposition "in order not to miss a single chance" for settlement.

"Russia's military support, the support provided by Syria's friends and the military achievements of the Syrian army – all this will lead to the speeding up of political settlement, and not vice versa," he said.

"We did not change our position before Russia's support or after it," he added.

Progress at the talks has been slow, with the government and its opponents deeply divided over any political transition, particularly whether Assad must leave power.

UN envoy Staffan de Mistura says he wants the negotiations to address the "mother of all issues", political transition in Syria. But before the talks started, the Syrian government said the issue of the presidency was a red line.

After seizing Palmyra on Sunday, Russian and Syrian jets targeted the town of Sukhna, about 60km northeast, where many retreating Islamic State fighters had sought refuge, the Syrian Observatory for Human Rights monitoring group said.

State media said the army and its militia allies also captured territory around Al Qaryatain, about 100km southwest of Palmyra, including farmland to the south and a mountain area to the west.

The Observatory said remaining Islamic State fighters had withdrawn from positions northeast of Palmyra. Russian and Syria jets and helicopters were bombarding Sukhna and carried 29 raids on Al Qaryatain on Tuesday morning alone.

If the army takes Al Qaryatain, Sukhna and other pockets of Islamic State control, it will sharply reduce the jihadist group's ability to project military power into the heavily populated western region of Syria, where Damascus and other main cities are located.

Russia and Iran, Assad's two main allies, both pledged to continue support for Damascus after the capture of Palmyra.

More than 250,000 people have been killed in the conflict. Ten million people have been displaced, foreign powers have been drawn into the battlefield and Islamic State has carved out a self-declared caliphate in parts of Syria and Iraq.