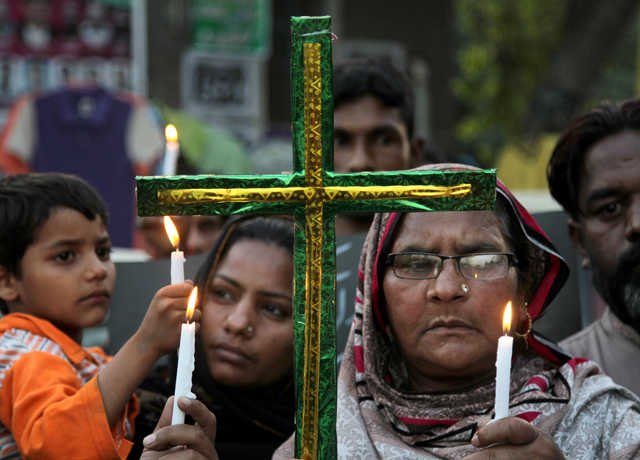 Pakistani Christians hold candles during vigil for the victims of Sunday's suicide bombing, at close to bombing's site in Lahore. (AP Photo)

Lahore: A year ago, Wasif Masih, 16, had a narrow escape when a suicide bomber from a faction of the Pakistani Taliban blew himself up during Sunday worship outside his church in a Christian neighbourhood in the eastern city of Lahore.

This past Easter Sunday, Wasif died when the same Taliban faction, Jamaat Ul Ahrar, sent another suicide bomber to a Lahore park full of families, killing 72 people including at least 29 children.

Wasif was so close to the blast that the bomber's head fell at his feet, his mother, Zubaida Masih, said as the family mourned at their house in Nishtar Colony, a neighbourhood with both Christian and Muslim families.

"It was as if they were following him. He escaped them then but they came after him again, in the park," Masih said. "If there was better security, this wouldn't have happened."

Two days after the attack, a sense of vulnerability is growing among members of the Christian community, who are calling on the government of Muslim-majority Pakistan to do more to protect them.

Christians, who number around two million in a nation of 190m people, have been the target of a series of attacks in recent years.

Now the Easter attack by Jamaat Ul Ahrar, which once swore support for Islamic State, has fuelled worries that militants in Pakistan are increasingly subscribing to the IS brand of ultra-sectarian violence against those perceived as infidels.

"Terrorists didn't used to be so focused on our community. Now all their attention is on us," said Irshad Ashnaz, the Christ Church vicar. "Perhaps it's time for the government to turn their attention towards us also."

"These people are roaming around freely and no-one is stopping them," Ashnaz said at the church, its windows cemented over after the attack.

Since the attack, Pakistan's deadliest since the 2014 massacre of 134 schoolchildren at a military-run academy in Peshawar, authorities have launched a crackdown on Islamist militants in the Punjab province, the country's richest and most populous and Prime Minister Nawaz Sharif's political heartland.

On Tuesday, a provincial minister said authorities had detained more than 5,000 militant suspects but later released most of them.

Punjab government spokesman Zaeem Qadri said the government had stepped up security at churches after the previous attacks, which was why militants had picked a park this time. He said over the past year, the government had uncovered more than 200 plots and arrested around 15,000 suspects.

"Parks are public places. On a public holiday there should have been more vigilance. But there was a gap," Qadri said. Christians "are as safe as anyone else. They are as safe as any other Pakistani is."

Irfan Jamil, the bishop of Lahore, said the government was trying its best.

But he added, "There is always room for improvement. Many of us don't feel that we are secure."

On Tuesday, survivors lined the wards of Jinnah hospital in Lahore. The explosion wounded more than 300 people. Above each bed is a sign that says, 'blast victim', followed by the victim's name.

One bed is only marked with the word "unknown." A three-year-old boy whose lungs were punctured and eyes gouged out is struggling to breathe through a tube. Visitors have placed flowers and juice packs next to his pillow.

"We don't know who he is," a nurse said as she held his hand. "Two days after the blast, no one has come looking for him."

Amid the fear, many Christians called for unity and brotherhood.

At a vigil on Monday in Gulshan e Iqbal park, where the bomber struck, Father Jamal Albert said the message is "whether you are Christian, Hindu, Jewish or Muslim, you are unsafe and they are trying to break down our nation, destroy our sense of oneness, our sense of being Pakistanis".

He added: "Rest assured we will not be deterred by such episodes. This is our country just as much as anyone else's. In fact we are more resolved than ever to go on."