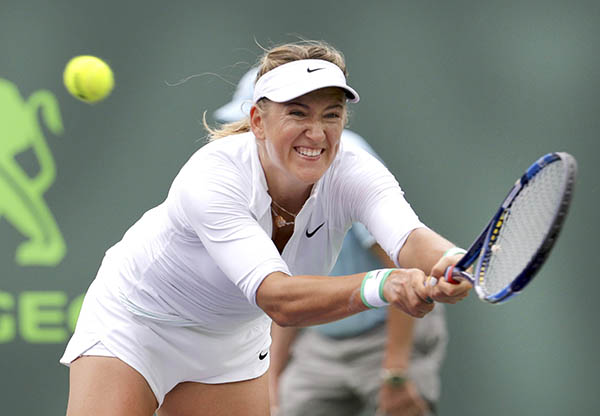 Azarenka hits a return to Konta

Azarenka, winner of the title at Indian Wells earlier this month, will next face the winner of a later match between German second seed Angelique Kerber, the reigning Australian Open champion, and US 22nd seed Madison Keys.

Eighth-ranked Azarenka, who was injured last year and had not been in the world’s top 10 since August 2014 until Indian Wells, will jump to fifth next week as a result of the victory.

“I’m going to continue to fight and get better,” Azarenka said.

“If I win, that’s great,” Azarenka said. “But right now I’m looking to the semis.”

Azarenka, who won her first title since 2013 in January at Brisbane, seeks her 20th career WTA singles crown after beating world number one Serena Williams in the Indian Wells final.

Australian Open semi-finalist Konta, who was born in Australia and became a British citizen in 2012, is the first British woman in the top 25 since 1987.

In the first set, Konta double-faulted away a break to give Azarenka a 4-3 lead and lost a break point in the eighth game on a review appeal. Azarenka rescued two break points in the 10th game and took the set when Konta netted a backhand.

In the second, Azarenka broke to love for a 2-1 lead, part of a run of 11 consecutive points. Konta sent a forehand long to surrender another break in the fifth game and Azarenka held twice to advance.

“I couldn’t get a good rhythm on her serve at the beginning. It was tough,” Azarenka said. “But once I got into that rhythm, I was able to make a difference.”

Berdych has a career win-loss record of 2-22 against Djokovic and has lost their past nine meetings over three years.

Djokovic, trying to match Andre Agassi’s record of six Miami titles, has won 13 matches in a row at the hardcourt event and 27 of his past 28.

The 28-year-old Serbian won his 11th Grand Slam title two months ago at the Australian Open and also has crowns at Indian Wells and Doha this year.