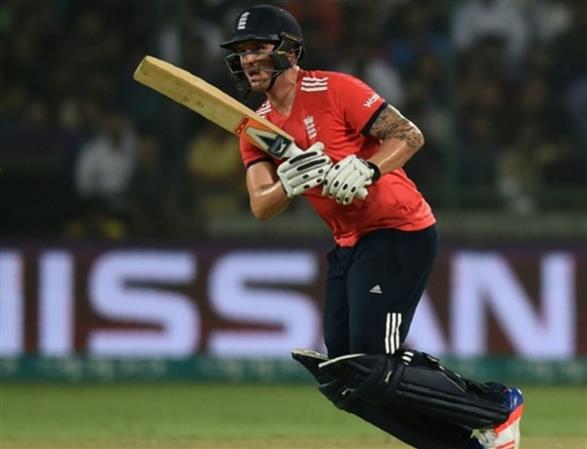 England's Jason Roy raced to 78 off 44 balls at the top of the order, rapidly taking the game away from New Zealand at the semi-final. (AFP Photo)

New Delhi: Dashing opener Jason Roy pledged that England would come out ‘all guns blazing’ in Sunday's World Twenty20 final as they look to complete their head-spinning transformation from cricket's laughing stock to champions.

Just one year ago, England were licking their wounds after an ignominious exit from the 50-over World Cup in which they failed to beat any team apart from minnows Scotland and Afghanistan.

But after crushing New Zealand in Wednesday's semi-final in New Delhi, Eoin Morgan's England are now only one step away from becoming the first two-time world champions in the game's shortest format.

New Zealand's bowlers had no answer as Roy raced to 78 off 44 balls at the top of the order, rapidly taking the game away from a team that won all four of their previous matches in the tournament.

England were widely ridiculed for their demise in 2015, which came a year after their embarrassing exit from the last World T20 in Bangladesh culminating in a tame defeat to the Netherlands.

The turn-around has been remarkable, with England ironically seeking to emulate the more aggressive style of cricket that was pioneered by New Zealand under their former captain Brendon McCullum.

Players such as Roy, Joe Root and Ben Stokes have come to epitomise what Morgan has called a "brash" new style of play that has seen England score more sixes than any other team in the tournament.

Sunday's final in Kolkata will pit England against the winners of Thursday's second semi-final between the hosts India and a West Indies side who beat England at the group stage.

"Whoever it is, we will meet them with all guns blazing," Roy told reporters, after England cruised to their target of 154 with nearly three overs remaining.

"We had a lot of negative feedback from a few people and to be in a world cup final now has hopefully got a few more people on our side."

The final is at Eden Gardens, one of the world's largest cricketing arenas, and Roy quickly abandoned his half-hearted attempt to portray it as just another match.

"This game is another game of cricket -- it just happens to be at Eden Gardens in a world cup final in front of 100,000 people," he said.

"It's going to be an incredible experience but we are going to go out there and play our natural way and the brand of cricket we have been playing for the last year or so."

England, World T20 champions in 2010, have been accused in the past of developing a siege mentality on tour under no-nonsense coaches such as Duncan Fletcher and Andy Flower.

The scars left by Kevin Pietersen's acrimonious sacking in 2014 after a disastrous tour of Australia have also taken time to heal.

But Morgan and England's Australian coach Trevor Bayliss have encouraged players to go out and enjoy themselves on the field, while a trip to the Taj Mahal pointed to a new sense of adventure off it.

Roy said the team had been "extremely chilled out" in the dressing room during the semi-final, while underlining their excitement at making the final.

"It's something we are extremely buzzing for.. We can't wait," he said.

Their achievement was widely hailed by the British press who said England had transformed themselves from being a "laughing stock" to potential world champions.

"Only a year after England were sent packing from the 50-over tournament with the world's mockery ringing in their ears, they are pinching themselves at the near-absurdity of it all," Wisden editor Lawrence Booth wrote in the Daily Mail.

Roy's innings "was the perfect example of the aggressive and free-wheeling style of cricket that England have played in the past year," John Etheridge wrote in The Sun, highlighting the huge contrast with the "humiliation" of 2015.

And former England skipper Michael Vaughan described England's qualification for the final as a "remarkable achievement".

"It is a joy to watch England play with skill, execute sensible tactical plans and bully the opposition," Vaughan wrote in the Telegraph.