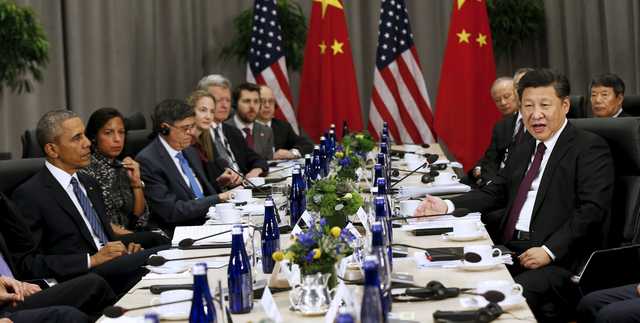 Obama with other leaders at the Nuclear Security Summit in Washington. (Reuters Photo)

The US moved Thursday to keep pressure on nuclear-armed North Korea and reassure China over the proposed deployment of a sophisticated anti-missile system to South Korea.

After meeting with South Korean and Japanese allies at the start of a nuclear summit in Washington, President Barack Obama said there is a need to "vigilantly enforce the strong UN security measures" against Pyongyang, following provocative nuclear and missile tests that violated several UN resolutions.

North Korea in January detonated a nuclear device and launched a long-range rocket a month later, the latest in a series of tests that have alarmed regional neighbors.

The White House wants to keep up pressure on the North Korean regime, increasing the economic and diplomatic cost of ignoring international appeals to mothball its nukes.

"The international community must remain united in the face of North Korea's continued provocations," Obama wrote in an article published on the eve of the summit.

"The additional sanctions recently imposed on Pyongyang by the United Nations Security Council show that violations have consequences."

The US and South Korea have begun discussions on deployment of THAAD – the Theatre High Altitude Area Defence System, a sophisticated missile system.

US delegates want to reassure Beijing that such a system poses no threat to China, which fears it will deepen US influence in the region.

"It is designed and capable only of responding to the North Korean threat," said Dan Kritenbrink, senior Asian affairs director at the National Security Council.

"It in no way threatens either Chinese or Russian or other security interests in the region and will do nothing to undermine strategic stability between the US and China."

Obama will later meet Xi, his only full bilateral meeting with the dozens of world leaders coming to Washington.

He will also hold what the White House is calling a "brief" meeting with France's President Francois Hollande.

China is seen as key to making sanctions against North Korea bite and believes China could more forcefully wield its influence over Pyongyang, including encouraging its Stalinist neighbor to tone down destabilizing rhetoric.

Tensions are only expected to rise in advance of a major Communist Party Congress in North Korea in May.

And Obama and Xi are also likely to touch on disputes in the South China Sea, where Beijing has occupied and is building on contested islands.

Washington fears the islets and atolls may be used for military purposes.

US officials see a steady series of meetings and exchanges between Obama and Xi as vital in limiting disagreements.

Ahead of the meeting, the White House announced that the US and China would be among the countries signing the Paris climate accord on April 22 in New York.

Obama and Xi are expected to meet again at the G20 in China in September.

The specter of the Islamic State group obtaining a "dirty bomb" will also loom over the summit, which is the fourth of its kind.

The White House had seen the meetings as elevating the problem posed by shaky nuclear safeguards to the highest corridors of power.

The meeting comes just days after 32 people were killed and 340 were injured in bombings at Brussels airport and the Belgian capital's metro.

The attacks featured conventional explosives, but two of the suicide bombers – Ibrahim and Khalid El Bakraoui – have been linked to 10 hours of video surveillance detailing the comings and goings of a senior Belgian nuclear official.

Few believe IS could develop a nuclear weapon, but many fear it could acquire uranium or plutonium and construct a "dirty bomb."

Such a device would not trigger a nuclear explosion but would scatter radioactive material – with potentially devastating physiological, medical and economic effects.

Nuclear material can be found in small quantities at universities, hospitals and other facilities the world over, often not well secured.

Since the mid-1990s, almost 2,800 incidents of illicit trafficking, "unauthorized possession" or loss of nuclear materials have been recorded in an International Atomic Energy Agency database.

More than 50 heads of state have been invited to attend the summit, but the absence of leaders from Russia, North Korea, Iran and Belarus virtually ensures gaps in the united front.

White House spokesman Ben Rhodes said Russia's decision not to attend at the highest level was a missed opportunity for Moscow, which itself faces significant threats of its own.

"Russia's lack of participation ... is, frankly, couterproductive given this is an area where we share an interest," he said. "We want Russia at the table on issues of nuclear security."

Obama also took a swing at Moscow, using his article to call for Russia to "comply fully with its obligations under the existing Intermediate-Range Nuclear Forces Treaty.

"The USs and Russia – which together hold more than 90 percent of the world's nuclear weapons – should negotiate to reduce our stockpiles further."